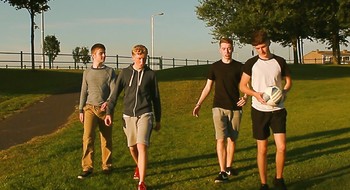 The Nutters is a pair of Irish comedy films written and directed by Jordan Lennon.

This Slice of Life focuses on a trio of boys in inner city Dublin - Jake (Jordan Lennon), Jimbo (Adam Douglas) and Luke (Liam Gaynor) - who are the titular 'Nutters'. Whatever they do, Hilarity Ensues. A recurring character is Jake's cousin from the country Eoin (Greg Young).

The first short was released in 2017, and a Christmas Special months later. In 2021, the films were taken down from YouTube, although there are plans to remake/update it with better production values.

May not be comprehensible to people outside the British Isles.