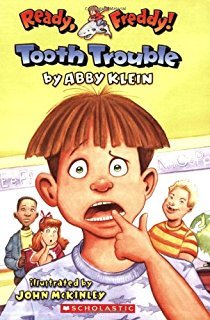 I have a problem. A really, really, big problem. I have a page on TV Tropes. Let me tell you about it.
Ready, Freddy! is a series of children's chapter books written by an elementary school teacher, Abby Klein. It is focused on Freddy Thresher, a second grader (first grader in original series) who experiences everyday problems and situations normal to an elementary student.
Advertisement:

Compare to Junie B. Jones, another children's chapter book series also focusing on a young elementary student. For the killer robot, click here.