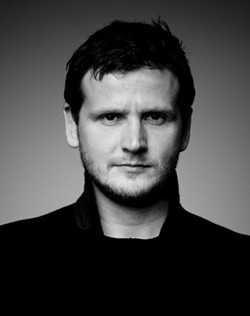 Dennis Gansel (born 4 October 1973) is a German director, writer and actor most known for his films The Wave (2008) and We Are the Night.
Advertisement:

He has been making films since the mid-1990s and studied film at Munich Film School HFF. He directed his first film, Das Phantom, while he was still studying. He tried to get to make a vampire film, The Dawn, but unable to finance it he took on directing an American Pie-style comedy: Girls on Top. The film was a success and he followed up by making the historical drama film Before the Fall, taking on Nazi Germany. After falling to get money to make The Dawn, he made Die Welle, which was a big hit. In 2010 he was finally able to make The Dawn but had to rewrite the script because it was too much like Twilight. The result was We Are the Night. Sadly the film bombed at the box office. The film was, however, met with praise and hailed as the antidote of Twilight and its imitators. It has received a cult following and fared better on DVD.

Tropes that apply to Dennis Gansel: