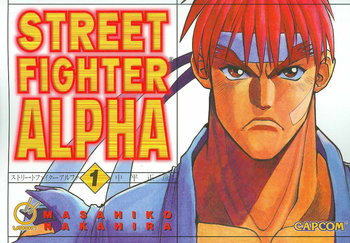 The series takes place after the events of Street Fighter, where Ryu has won the tournament but now feels directionless in life. After a confrontation with Interpol agent Chun-Li, Ryu discovers an evil force growing within him—the Satsui no Hado—and must learn to suppress it before it consumes him. Interpol recruits Ryu in their fight against the criminal syndicate Shadaloo, joined by the US Army agent Charlie Nash. Prompted by the mysterious Rose's fortune-telling, Ryu sets out to stop Shadaloo and find the two "men in red" who can help him master the force within him—his friend Ken Masters and Guy, a vigilante who travels around the world.

This series is notable for introducing Evil Ryu to the franchise.