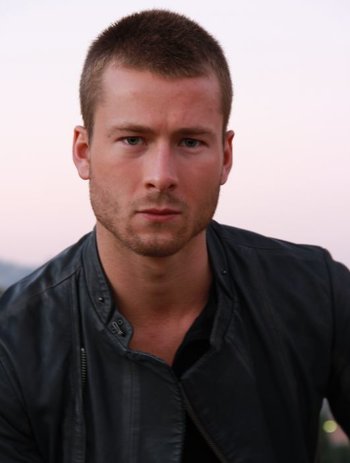 He has been acting since childhood, and has only started to gain real traction in The New '10s. Early roles included bit parts in the Spy Kids franchise, episodes of Jack & Bobby, CSI: Miami and NCIS. At the age of eighteen, he was filming The Great Debaters when a man came up to him and told him he resembled a young Richard Gere. The man was Hollywood superagent Ed Liamato - who advised Glen to move to Los Angeles, which he did after his freshman year of college. He got a big boost by starring in The Expendables 3 as Thorn - and has started to gain more traction in movies. He's been lucky enough to collaborate twice with Richard Linklater - first on Fast Food Nation when he was just fifteen, and later on Everybody Wants Some!!!! - the Spiritual Successor to Dazed and Confused.

The role that a good amount of fans associate him with (though time will tell of course) is that of Jerk with a Heart of Gold Chad Radwell on Ryan Murphy's horror comedy show Scream Queens (2015). As Chad is considered to be the show's Breakout Character, this naturally sent a lot of positive attention Glen's way.

Apparently his parents work as extras on most of the films he stars in, his mother playing a bit of a prank on Mel Gibson on The Expendables 3. Oh and he's also got DC Comics cred via a small role getting choked to death by Bane in The Dark Knight Rises.

Tropes present in his body of work: