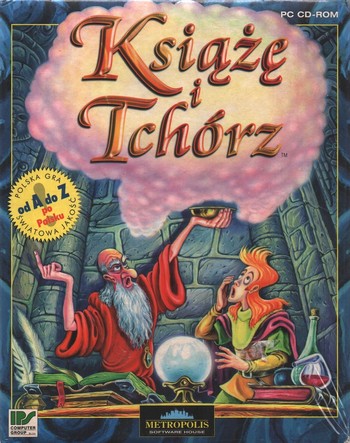 You wanted to be a prince, and now you want to go to Hell.
Arivald: Hello there, young man. Who are you, a grave robber?
Galador: No way! I'm... Ugh, it's not that easy to explain, because, you know...
Arivald: Oh. And I always thought that's the easiest question in the world.
Advertisement:

In a medieval fantasy world, a lazy yet cunning young man spends his days by visiting a tavern, listening to bards and dreaming about being a hero. One day, his dreams come true when a demon appears before him and suggests him to sign a contract to become a prince. Thrilled by the possibilities, the young man does so, and his soul gets immediately transferred to the body of a local prince named Galador... who was just preparing for a fight with a Black Knight twice his size.

Obviously, this was not what newly-minted "Galador" expected. And he does exactly what everyone else would do in such a situation: runs away.

Now, with the King being enraged at his own son up to denudifying him from all political rights, Galador, hiding at the local graveyard and not knowing where to go and what to do next, decides to Set Right What Once Went Wrong. After a series of circumstances, he convinces the local gravedigger to revive some dead soul for help, and, eventually, from his thousand-year-old grave, emerges Arivald, a powerful wizard and a hopeless alcoholic. Even though Arivald's mind is centered mostly on the bottle, he helps Galador out and reveals him the only way to solve his problem with the demon: he must go to Hell. Literally.

Książę i Tchórz (The Prince and the Coward) is a Polish point-and-click Adventure Game by Metropolis Software released in 1998. At Poland's then-spurting video game market, it became a huge success and for some time, held the title of the best Polish game. It uses the SCUMM engine, and its aesthetics are very similar to The Curse of Monkey Island, yet filled with specific Polish-coloured humour and a huge amount of snark. It was officially translated into German by the title Galador: Der Fluch des Prinzen. Later, the German version was semi-officially localized in Russia, with a lot of technical mistakes, mistranslations and bizarre dub voices. Nevertheless, memories of this game still travel across Russia, Germany and Poland, but nowhere else: it was neither translated into English nor ever re-released and, therefore, remains one of the most obscure games...

... until GOG.com released it in November 2021, not only clearing the old translations, but also adding English version.