Music / Songs of Faith and Devotion 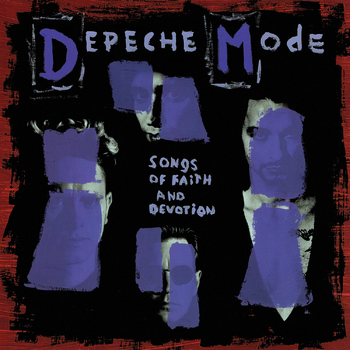 "This is the morning of our love."

Songs of Faith and Devotion (or SoFaDnote not to be confused with 11.68 inches in the Barsoom stories by Edgar Rice Burroughs), released on March 23, 1993, is the eighth album by British Alternative Dance band Depeche Mode. Its production and subsequent tour were so troubled that a quartet turned into trio as Alan Wilder left in 1995, thus making this their last album with him.

A brave Genre Shift for the band, it introduced a new, much rockier sound with more prominent guitars, taking after the grunge boom that was at its peak at the time. The first, pre-album single, "I Feel You", which appeared on February 15, has a distinctive alternative rock sound previously thought uncharacteristic for the band. The video featured English actress Lysette Anthony.

Despite managing to climb to the top chart position both in the UK and in the USA, Songs of Faith and Devotion was generally regarded less favourably than its predecessor, Violator. However, it allowed the band to maintain both the strong following that Violator brought and their relevancy in the post-Nevermind age of popular music.

Two tours were arranged after the release of the album, both of them extremely long and chaotic. The first one, the Devotional tour, lasted throughout 1993. The second one, the Exotic tour, lasted for a good half of 1994. Many songs off former albums were subjected to Adaptation Expansion including "Everything Counts" from 10 years ago which was performed in a manner approaching tracks off this album. The latter part of Exotic featured an acclaimed support band in the form of Primal Scream, who were contracted after the success of 1991's Screamadelica (though since then, Primal Scream had already released a new album to very mixed reviews). Also the tours both featured black vocalists Hildia Campbell and Samantha Smith who matched the gospel-y trends of the band. David Gahan sported long hair and a beard and looked like Jesus.

In the course of the tour, the members never ceased to fight, leading many to wonder whether or not the band would break up; while Depeche Mode as a whole stayed intact, in the end Alan Wilder left the band to set up his own project named Recoil. Moreover, in 1994, Andrew Fletcher left the band in the middle of Exotic. Later, of course, he returned.

Anton Corbijn made videos for all four singles, including "I Feel You", "Walking in My Shoes", "Condemnation" and "In Your Room".

"Now I'm not looking for absolution, forgiveness for the things I trope"