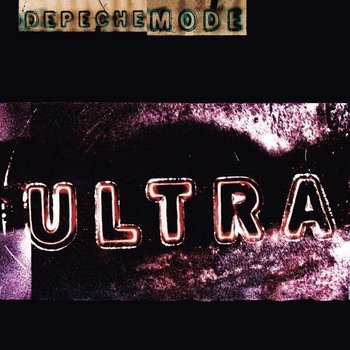 Ultra is the ninth album by British Alternative Dance band Depeche Mode, released in 1997. Prior to recording, the group experienced a protracted phase of turmoil: Alan Wilder quit in 1995, disillusioned with life as a member of the band after the chaotic production of Songs of Faith and Devotion and the extended mayhem of its subsequent tour; singer Dave Gahan attempted suicide in 1995 and suffered a near-fatal heroin overdose the following year, and feelings among the band's members had grown so tense that it was difficult to come up with usable material anymore. Thus, the band ceased to be a creative powerhouse, reverting to a trio for the first time since A Broken Frame in 1982 and taking over a year to finish recording for the album. Such was the trauma of this period, the band seriously considered breaking up in the midst of it all. However, they'd eventually overcome this turmoil and push through, remaining active up to the present day.

While Ultra continues the mix of Synth-Pop and grunge that marked SoFaD, Depeche Mode realized that without Wilder, they could hardly once again reach the scope and depth of that album, and another vinyl LP-length record would've been considered a notch or more below its grandiose predecessor. Perhaps to compensate, the album ended up being much longer than any of Depeche Mode's prior releases, clocking in at a whole hour and informing the more CD-oriented lengths of most of their following records.

Ultra is carried by the strength of its four singles: "Barrel of a Gun" (released 3 February 1997), "It's No Good" (released 31 March 1997), "Home" (released 16 June 1997), and "Useless" (released 20 October 1997). The first and the last of them are the hardest numbers on the album, electrorock with the stress on "rock". "It's No Good" was the most enduring hit single, being considered on par with the material the band had crafted with Wilder and going on to become the definitive song of Depeche Mode's late 90s period. These three songs were probably the purest specimens of alt-rock ever put out by the band alongside 1993's "I Feel You" and 2005's John The Revelator. "Home" meanwhile was one more otherworldly downtempo ballad sung by Martin Gore, being far more esoteric yet at the same time far more stark via tapping into Gahan's newfound sobriety in the wake of his overdose. The singles nearly completed the first side of the record, with the only non-single track from this half being "The Loves Thieves", a psychologically deep and heartfelt song about an evil maneater.

The album's tracks on the second side didn't fare as well, being mostly forgotten quickly after the album's release. "Insight", the final track, is a somewhat standout item, but here the rocking is much more subdued. The remaining songs meanwhile are pieces of languid nocturnal music, informed by the band's growing interest in Trip Hop that would more readily manifest on Exciter four years later. Jaki Liebezeit of Can drummed on "The Bottom Line", which probably prompted a few Krautrock aficionados to check this track.

The band themselves were sated with public drama after the circumstances surrounding the album's production, and because they had much less room for controversy as a trio they dialled back their antics in time for the release of Ultra, appearing to suddenly mature even further than before. Dave Gahan in retrospect seemed to grow the most out of any member of the band, spurred on in part by his near-fatal overdose and his subsequent motivation to finally clean up for good. For the sake of their health and sanity they also reduced the scale of their commercial ventures: a tour for the album did not happen at all, with the band's next tour occurring the following year in support of Greatest Hits Album The Singles 86>98. (This tour would only encompass North America and Europe in spite of having a slightly larger amount of shows than the 1994 Exotic tour before it, with the smaller-scale model being retained until 2009, when the band returned to worldwide touring in support of Sounds of the Universe.) Longtime collaborator Anton Corbijn started to dial down his involvement with the band as well: while he directed almost all of the videos for this album barring "Home", his only later contributions to the band were the videos for "Suffer Well" off Playing the Angel, "Should Be Higher" off Delta Machine, and "Where's the Revolution" from Spirit.

Despite all of this, the album still managed to be a strong commercial success for the band, topping the charts in the UK, Belgium, the Czech Republic, Germany, Greece, Spain, Sweden, and the collective European Union, peaking at No. 5 on the US Billboard 200, and going on to be certified platinum in Italy and gold in the UK, the US, Belgium, France, Germany, Spain, Sweden, and Switzerland. While considered a step down from SoFaD by both fans and critics, it was and still is mostly well-regarded, being considered a worthy follow-up to its 1993 predecessor and being ranked alongside Playing the Angel as one of the two best albums of the post-Alan Wilder era (which is otherwise accused of Seasonal Rot). In 1999, Ned Raggett ranked Ultra as the 50th best album of the decade, and the record is more widely recognized nowadays for its heavy influence on the Polish rock scene, with local magazine Tylko Rock ranking it at No. 71 on 100 Albums That Shook Polish Rock.