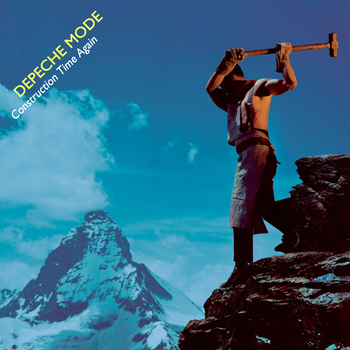 "Everything counts in large amounts."
Advertisement:

Construction Time Again, released in 1983, is the third album by English Synth-Pop group Depeche Mode. A noticeable shift in sound from the band's bubblier first two albums, this one marks a significant turning point in the band's output. Having recruited Alan Wilder shortly after the release of A Broken Frame the previous year, the band started to explore a Darker and Edgier and more experimental direction that would first manifest on this record, gradually increasing in intensity and galvanizing itself three years later on Black Celebration, with the band only getting darker and weirder from there.

With this album, the band shifted to a prominent use of sampling, spurned on by co-producer and Mute Records head Daniel Miller acquiring a Synclavier, giving the band access to a wider array of sonic techniques not available on conventional analog synthesizers. Additionally, shortly before the release of the band's non-album single "Get the Balance Right!", songwriter Martin Gore developed an interest in finding ways to incorporate elements of industrial music into pop, influenced by an Einstürzende Neubauten concert he had attended. Additionally, a trip that Gore took to Thailand led him to incorporate more sociopolitical lyrics into the band's songs starting here, influenced by the widespread poverty he witnessed in the country.

Construction Time Again spawned two singles: "Everything Counts" (which has become a frequent revisit in live concerts) and "Love, in Itself".

There was a time when all on my mind was tropes: