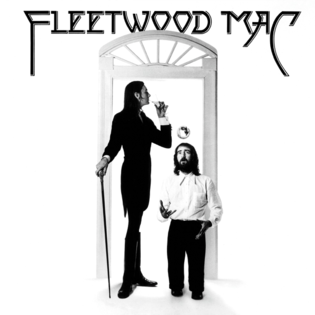 Would you stay if she promised to you heaven?
Will you ever win?
Have mercy baby on a poor girl like me
You know I'm falling, falling, falling at your feet
I'm tingling right from my head to my toes
So help me help me, help me make the feeling grow

'Cause when the loving starts and the lights go down
And there's not another living soul around
You woo me until the sun comes up
And you say that you love me
—"Say You Love Me"
Advertisement:

Fleetwood Mac is the tenth studio album—the second Self-Titled Album—recorded by the British-American Rock & Roll band of the same name. It was released through Reprise Records on 11 July 1975.

In terms of their discography, it is sometimes referred to as "The White Album". Not to be confused with The White Album, a 1968 Self-Titled Album by The Beatles.

Following the release and promotion of their ninth album, Heroes Are Hard To Find, lead singer Bob Welch departed the band. Band co-founder Mick Fleetwood met with a new producer, Keith Olsen, who gave him some demos to listen to. One of them was titled Buckingham Nicks, and was performed by a pair of lovers, Lindsey Buckingham and Stephanie "Stevie" Nicks.

Mick was initially delighted by one of Buckingham's guitar solos, and sought to hire him as their guitarist. But Lindsey wanted Stevie to join as well, so Mick arranged a joint meeting at a Mexican restaurant. Stevie won him over, and both were hired.

Over the next three months, the refreshed band recorded this album. The album held eleven tracks, spawning four singles: "Warm Ways", "Over My Head", "Rhiannon", and "Say You Love Me".

Sales were slow at first, but in 1976 it took off, with "Over My Head" being their first Top-40 hit in the United States. Both "Rhiannon" and "Say You Love Me" would subsequently top out at #11 on the Billboard Hot 100. And the album would blow up from there.

But another song that was unreleased on its own, "Landslide", would eventually become one of the band's most well-loved songs, as well as one of Stevie's signature songs on her own.

"And if you see my reflection in the snow covered tropes"