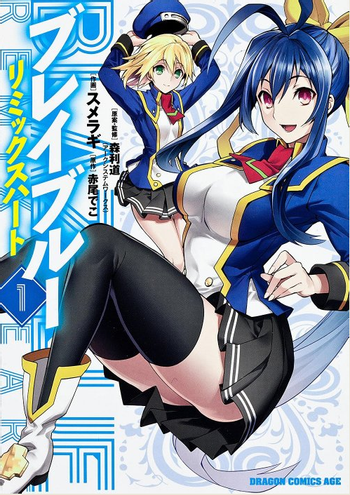 BlazBlue: Remix Heart is a prequel manga taking place before the start of the main series and is set at the NOL's military academy in the 15th Hierarchical City of Torifune when many of the characters were still students. It is drawn by famous Doujinshi artist, Sumeragi, and authored by writer for the Blazblue games, Deko Akao, based on a story outline by the producer of BlazBlue, Toshimichi Mori. The story centers around Mai Natsume, a new student who had just arrived late due to a week absence and focuses on her interactions with her roommate Kajun Faycott and other major characters from the series including Noel Vermilion, Tsubaki Yayoi, and Makoto Nanaya, all of whom then make a posse together called Remix Heart. Other characters from the games do show up, but mainly as cameos. The series was serialized in a digital only magazine and ran for 24 chapters.

Blazblue Chronophantasma Extend includes a section named Remix Heart Gaiden containing two side-stories that take place during the early part of the manga. Remix Heart will be getting a sequel manga titled Blazblue Variable Heart written by Mori himself and illustrated by Sumeragi.