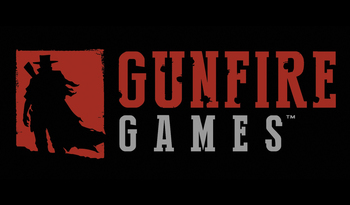 The studio began after the bankruptcy of the publisher THQ in 2012, and subsequent liquidation of that company's assets, including Vigil Games. Some of the staff from Vigil started developing a game called Hunt at Crytek USA, but because of financial issues at Crytek, the project was halted. Eventually Adams and the staff over at both Vigil Games and Crytek USA formed Gunfire Games independently in 2014, initially with seven staff, which rose to around 60 persons by 2017. The company's early work included several VR games for both the Oculus Rift and Samsung Gear VR, as well as a remaster of Darksiders II (Darksiders II: Deathinitive Edition). The company was acquired by THQ Nordic in August 2019.