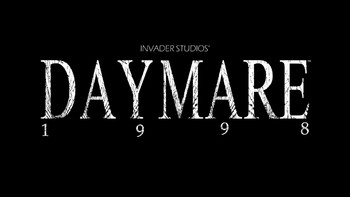 Daymare 1998 is a third-person Survival Horror game with over the shoulder camera, developed in Unreal Engine 4 for Windows PC via Steam, the Playstation 4 and Xbox One by 2019 under Invaders Studios, published by Destructive Creations.

In 1998, an industrial accident transforms the unaware citizens of a little community of Keen Sight, Idaho into violent and deformed creatures, a town that's changed thanks to the backing of a company called Hexacore Biotechnologies. A HADES (Hexacore Advanced Division Extraction and Search) team is dispatched to investigate the area and take out the monsters roaming around.

Involved in the op is a (supposedly) ex-Russian soldier named Liev and chopper pilot Raven, the two being deployed in a HADES op to secure Keen Sight in Idaho. The last survivor of KS is Samuel, who just so happens to be caught in the middle of the outbreak. He also happens to be medically diagnosed with a condition known as Daymare Syndrome, which causes panic attacks and anxiety with random visions.

You are expected to survive to this waking nightmare that has its roots in a nostalgic mood. The narration is full of direct references to the pop culture of the 90's and the modern gameplay mechanics fit perfectly with the old school survival horror atmosphere.

Invader Studios was previously developing a fan remake of Resident Evil 2 before the project was abandoned at Capcom's request. Resident Evil 2 was released in 1998, a number that features heavily in Daymare's marketing, most prominently in its name.

This new title features "many connections with beloved old school survival horror games and '90s landmark brands", according to the developer. A number of developers that worked on Resident Evil titles have also signed up to contribute to the project. Kazuhiro Aoyama, who served as planner on the first Resident Evil and directed Resident Evil 3: Nemesis, is associate producer on Daymare. Satoshi Nakai, enemy designer on Code Veronica, is contributing as creature sketch artist. Paul Haddad, the first voice actor for Leon Kennedy, has been recruited for the project.

The game was released on September 17, 2019. Be careful of spoilers, especially since the game was just released.

The debut trailer can be seen here