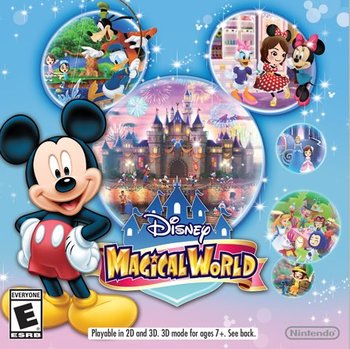 A 3DS game created by Namco Bandai and released in April 2014, Disney Magical World (Disney Magic Castle: My Happy Life in Japan) is a "life sim", along the lines of the Animal Crossing series. At first glance, one would assume it is an expy of said series, its main mode is very similar, but it has numerous things that set it apart.
Advertisement:

Instead of being invited to a town that is in desperate need of your help to gain popularity and residence, the player character is invited to a Disneyland-like setting. A series of circumstances involving various Disney characters introducing themselves, and befriending a king leads to you owning a café, and receiving a wand from Yen Sid. Instead of just a hub, numerous mini-worlds based on Disney franchises (ala Kingdom Hearts) can be visited. The first game features Cinderella's village, Winnie the Pooh's Hundred Acre Wood, Aladdin's Agrabah and Alice in Wonderland's Wonderland as available worlds, with Pirates of the Caribbean's Tortuga as DLC. However, even more characters can appear despite not being able to visit their worlds: Lilo & Stitch, Peter Pan, Snow White and the Seven Dwarfs and Beauty and the Beast all appear, among others.

After receiving the right equipment, missions begin to crop up. Ghosts appear, causing trouble for Disney characters and being the enemies of quests. Balls can be attended, gardens can be grown, and so on as one gets stickers from achievements that allow them to do more in the game.

A sequel, Disney Magical World 2 for the game was released in Japan on November 25, 2015. It features even more stores featured in Castleton (with new classic Disney characters such as the Three Little Pigs), and new worlds: Frozen's Arendelle, The Little Mermaid's Under the Sea world, Lilo & Stitch's Hawaiʻi, Snow White's Cottage, and the Alice and Winnie the Pooh worlds returning. New guests are The Nightmare Before Christmas's Jack and Sally, Tangled's Rapunzel and Flynn and Wreck-It Ralph's Ralph and Vanellope, among others. Another new feature is the possibility of taking part in a night parade among Castleton with the Disney characters, fully inspired by Tokyo Disneyland's night parade "Tokyo Disneyland Electrical Parade Dreamlights". The sequel came to North America and Europe on October 14, 2016, and Australia on October 15. An Enchanted Edition of this game was released for Nintendo Switch on December 3, 2021.

In December 2016, an arcade spin-off for the series, Disney Magic Castle: KiraKira Shiny Star, was released in Japan. Instead of being a life sim-type game like the previous two games, KiraKira Shiny Star is a Rhythm Game where you take control of a girl who gets invited to Castleton and engages in rhythm-based activities with the Disney characters. You may customize your character as you like, including hair and facial features, and you may obtain new outfits for your character, which have varying degrees of appeal and affect the number of points you receive, using coordination cards. Most of the characters and worlds return from previous games, but there are also some new worlds, including the Beast's castle from Beauty and the Beast, Tangled's Kingdom of Corona, and Sofia the First's Enchancia. Only one new Disney character was added: Sofia from the aforementioned Sofia The First.