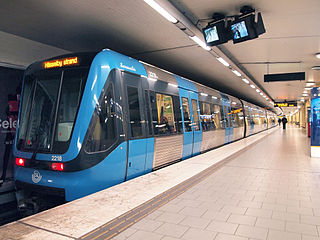 The Stockholm metro (in Swedish, Tunnelbanan note "Metro" is the official translation (the oldest plans refer to it in English as the "Metropolitan Railway"), but the locals will more often refer to it as the subway or underground, depending on age) is the only one in Sweden, and the oldest in Northern Europe. It formally opened in 1950, but some sections were operated with trams as early as 1933. Today it's one of the systems with the most track miles per capita, and covers large parts of the city very well (along with the congestion charge levied on drivers entering the city, this means you're well advised to use it instead of driving around the city). It's also notable as the origin of the "T" sign that is also used by the Boston system, and this symbol permeates the entire system.

History
In the interwar period, the city of Stockholm had an extensive tram network, but this did not initially have much coverage outside the city centre. In many cases the companies that constructed the more affluent suburban neighbourhoods (förstäder) built suburban railways (förstadsbanor) to go along with them, and these were connected to the inner city via the tram network. However, the narrow streets on Södermalm (the large island that forms the southern part of the inner city) were easily congested by the frequent suburban trams, and in 1930 the decision was made to build a tunnel under Götgatan, from Slussen to Ringvägen (today's Skanstull station). This opened three years later, with the moniker "Tunnelbanan" (literally "the tunnel line") being invented to refer to it, and artist Kalle Lodén creating a logotype for this bold new form of transportation. He came up with a white capital T inside a black circle, initially with the word "tunnel" on one side and "banan" on the other. Over time, the side text was removed, the colours changed and the signs made luminescent, and the resulting blue T in a shining white circle has become synonymous with the metro system.

In 1952, the second subway opened. This line served the northwest, running from Kungsgatan (today's Hötorget) in the Norrmalm district to Fridhemsplan in the west of the city, where it connected to the existing high-speed tram line to Vällingby, which had been built to metro standard in the first place. Over the previous two years, the first subway and the lines that connected to it had been fully grade-separated and its stations upgraded to full metro standard, and new trains made to serve the metro exclusively were brought into service to handle the passenger load. The two systems were finally connected in 1957, when what would become the central hub of the system was opened under Norrmalm, just east of the railway station with a pedestrian tunnel connecting to it. This completed most of what was to become the green line.

The late 1950s and the entire 1960s were a time of rapid change for Stockholm. Klarakvarteren, the ageing, hilly and cramped neighbourhood that covered much of lower Norrmalm, was almost completely flattened and replaced by a more modern business district. As part of this process, additional subways were dug, and the red line opened for business between the central station (by this point referred to as "T-Centralen" note the T being short for "tunnelbana" and the "-en" suffix being a definite marker) and Fruängen, the terminus of yet another rapid tram line in the southwest, in 1964.

It was at this point that the idea arose for the stations to include public art displays, and this concept was to come into full bloom with the opening of the nearly entirely underground blue line in 1975. The last of the trams had been abolished in 1967 with the change to right-hand traffic, with the exception of the two suburban lines to Lidingö and Nockeby (which still exist today), and so by this point the urban rail system consisted largely of the metro and the various suburban rail lines, with buses going from the stations to surrounding suburbs.

The only extension built after 1980 was one station, Skarpnäck, at one end of the green line. Since then numerous extensions have been proposed, including extending the blue line east to Nacka and converting the two remaining suburban rail lines to full metro standard, as well as a ring line which ended up being built as light rail. At the time or writing (early 2014) it looks as though the former is being built within a relatively short period, along with a branch on the green line to cover the planned neighbourhood of Hagastaden.

The system consists of three lines: note The word "line" is used in the New York sense, meaning a physical rail corridor. If the word is used to mean a distinct service, there are seven of them.

The green line (gröna linjen) is the oldest, and consists of suburban tram lines that have been connected by a subway through the inner city note this is similar to the green line in Boston, only these lines are grade-separated. There are three services, numbered 17, 18 and 19, which all run more or less from southeast to northwest. They have their southeastern termini at Skarpnäck, Farsta and Hagsätra, respectively, and all three have their northwestern termini in different places along the same corridor, the former Ängbybanan tram line to the west of the inner city.

The red line (röda linjen) was the second to open, and was mostly built for metro service to begin with. Though sharing its alignment across the inner city with the green line note a geographic necessity given how the only other options were an expensive underwater tunnel or digging under the medieval centre, the lines are actually in separate tunnels, with the green on top and the red beneath it. The two services, which run broadly from southwest to northeast, are numbered 13 and 14, running from Norsborg to Ropsten and from Fruängen to Mörby respectively. There used to be a supplementary service between Norsborg and Mörby, numbered 23, but this has been removed.

The blue line (blå linjen) is the newest, and was built entirely to metro standard in the mid to late 1970s. It's almost entirely underground note Fun fact: the Hjulsta branch is the longest tunnel of any kind in Sweden, but oddly enough includes the only elevated station in the network, at Kista. There are two services, numbered 10 and 11, both of which end at Kungsträdgården, one station east of T-Centralen, and go northwest. If you've heard of the Stockholm metro's reputation for being a living art gallery

, this line created that reputation, with almost all stations having some amount of public art in it, ranging from simple paintings on the columns to entire stations painted to some theme, usually to do with its name (for example, Näckrosen, whose name is Swedish for "the water lily" is decorated to resemble a pond with such flowers in it). The blue line is also home to the service's only "ghost station" at Kymlinge

, built in expectation of a suburb that was never built.

There is a unified fare system that is used on buses, trams, the metro, and the suburban rail. The system has four zones, but the metro runs entirely within the innermost zone, so unless you're planning a trip into the outer suburbs there's really no need to learn where the zones meet. This system isn't as simple as it sounds though, as tickets cost different amounts depending on how they're bought. The cheapest method is to buy a smartcard at 20 crowns (a little over €2) after which each trip costs 30. If bought at the station, the fare can be as high as 43 crowns. Day passes can be bought at 120 crowns, or weekly passes at 315.

A piece of useless trivia: each of the new 'blue' carriages (like the one on the picture) bears an individual name.