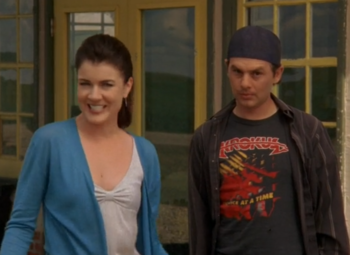 "There is nothing I love more than a man talking about diesel!"

A Plot: Karen is tired of Davis making dumb blonde jokes at her expense, and has him take a sensitivity training course. However, Davis's new politically-correct mindset annoys Karen and Oscar.

B Plot: Hank is celebrating because it's been seven years since he broke a mirror, meaning his bad luck's run out. Brent tries to convince Hank and Lacey that superstition means nothing, making his own day worse in the process.

C Plot: Emma has a gym pass that she never uses, so Wanda asks for it, even though it's labeled "non-transferable". When she visits, Wanda wins a members-only raffle for a new television, and she has to pretend to be Oscar's wife to keep it.