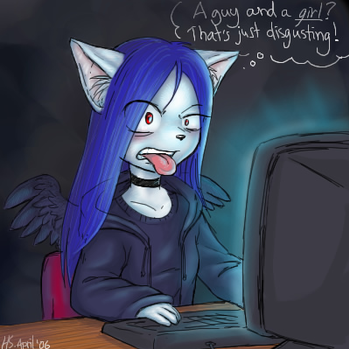 Some people are fans of Slash Fic — the Shipping of two same-sex characters from a fandom together. Some people take this a little further though; they don't just like Slash but also dislike the idea of Shipping two opposite sex people together, even if those doing the shipping are themselves straight. Indeed, it's wrong to think that only LGBT fans invoke this trope when they themselves are also open to het ships.

This is a subculture-within-a-subculture. This can range from people who merely prefer to pair off every character they like with another of the same sex to the more extreme people who appear to argue that writing slash is a politically liberating act, or that the ubiquity of heterosexuality somehow makes it less "valid" than homosexuality. Queer fans, for example, may have an averse reaction to the heteronormativity of the media and respond by augmenting queer representation in a work. note  The counterargument is that most slash is about as realistic about same-sex relationships as your average straight fic is about heterosexual relationships. Occasionally it can be an unexpected by-product of backlash against the addition of Canon Foreigner characters, or authors pairing up the male characters who are perceived to be more interesting than the female ones. note  Ironically, this means that multiple female fanfic writers are even worse about female character inclusion than the mainstream media producers. When males began taking up writing fanfiction more, they often did the same for female/female pairings against the background of Wish-Fulfillment and Harem fics, especially if they perceived the main male character to be a blank slate. This led to a widespread perception among Fan Fic writers that Slash Fic is automatically of "higher" quality than a het pairing, which was often assumed to be the (usually female) author's Wish-Fulfillment.

The extreme versions are the kind who write hate mail to authors for daring to give their shipped characters an opposite-sex spouse and impose Die for Our Ship on any opposite-sex character who so much as has sexual tension with one of "their" characters, often in the most sadistic and humiliating ways. Other times, people proclaiming that Het Is Ew are just tired of the ubiquity of het romance plots in all variety of fiction and the tropes that go with them, particularly the stereotyping of everyone involved. (Ironically, said heteronormative romance dynamics frequently show up in the slash genre as well, with one character still playing a stereotypical male role, while the other takes a stereotypically female one, sometimes up to getting pregnant). The Butch and Femme dynamic is also popular in Yuri ships with the same roles mentioned showing up everywhere.) The sentiment is also somewhat common among jaded and vengeful subsets of queer/trans people, who take to describing straight characters with the same disdain that queer relationships are often treated with. Despite this, the intensity of the extremists has been known to scare artists away or make them outright refuse to draw yaoi or yuri (or at least force them to write under a different name).

Counterintuitively, there may be a homophobic element to this trope in some cases. Straight people who subscribe to the notion may feel that their own sexuality is threatened if they find a work that includes a member of their own sex arousing, and this is most common with males who invoke Het Is Ew. This is one of the reasons for the prevalence of lesbian porn aimed at straight men; male viewers don't need to worry about being turned on by another guy. There's also a case for elements of biphobia, where romantic relationships involving characters of the opposite sex are attacked or invalidated as heteronormative for being mutually exclusive with the capacity for same-sex attraction, even when one or more of the characters involved is already canonically bisexual.

Meanwhile, there is an air of misogyny with people (ironically mostly women this time) who endorse Het Is Ew since not only are female-female pairings much rarer than male-male ones,note even in franchises with prominent female leads like Alien or Once Upon a Time the women in het ships get the most hate and slash pairings often kill off or demonize the female characters in order to enable ships with men only.

Finally, misandry is also an arguable factor, as there is the problematic assumption that a male cannot have emotional closeness to anyone — even family members — without sex being a factor. Such a notion often underlies the romanticized portrayal of lesbian pairings as healthier, more wholesome, and more sincere than het pairings, with the implications that (a) straight men are too horny to feel genuine love towards their female partners or even see them as anything other than sexual objects, and (b) women are naturally above physical attraction and therefore more attuned to genuine love, so two girls can love each other without lust clouding their minds. This is why the memetic phrase "Yuri is the purest form of love" exists amongst anime fans, with varying degrees of seriousness from those who espouse it.

For fanfic writers who are not interested in the extremist hate invested in Die for Our Ship, they instead often Ship the person "in the way" with a different person in the cast who is the same sex as them; i.e., if they Ship Bob and Dave, but Alice is Bob's Canon girlfriend, they write fics about Alice realizing she actually loved her best friend Carol all along, rather than about Alice dying in a house fire. This isn't universally true, but it's not uncommon, either. Basically, when these fans write Fan Fic, everyone is gay.

It's worth noting that this is a fan-reaction Trope, dealing with the preference of a number of slash and yaoi or yuri fans to read about only homosexual relationships. It's not about in-universe anti-heterosexual feelings expressed within a work of fiction.

Depending on what circles you run in, this can actually be a joke, usually about why they don't write Gen Fic.

See also Het. Pre-pubescent boys may feel Girls Have Cooties, but that usually changes when they're older and tend not to be attracted to each other, as love itself in all forms is girly to them. For cases where heterosexuality is depicted as being Sick and Wrong in-universe, see Persecution Flip.