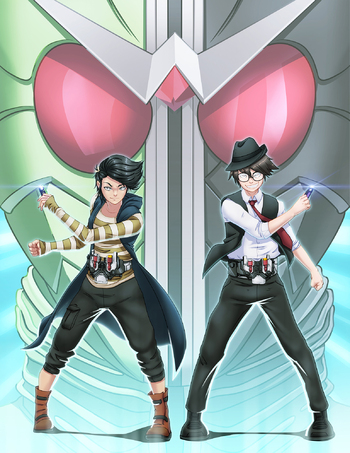 Love Hina Double Trouble Cover Picture
"Good grief! Is everyone in your family a Kamen Rider? What's next? Haruka brings out a belt and starts kicking butt?"
— Naru Narusegawa
Advertisement:

is a crossover story made by Kamen Rider Chrome and Ten-Faced Paladin that combines the worlds of Kamen Rider Double and Love Hina. Joined by his adoptive brother, Philip, recent Tokyo University graduate Keitaro Urashima is called in by their grandmother to look after the Hinata-Sou. Some of the craziness from the anime is still there, but the Dopants are still a problem, attacking people whenever they can. The half-and-half detectives must soon work with their female tenants to solve the mystery behind the crimes in their city, and find the organization responsible. Now has a wiki wiki

They have also created other Kamen Rider fanfics called Kamen Rider OOO: The Metals of Ikki Tousen, Showa & Vampire and Rosario to Kiva.