Literature / Book of the Long Sun 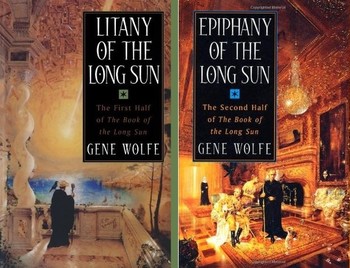 In 1983, the final volume of Gene Wolfe's magnum opus, Book of the New Sun, was released. Fans of this obscure masterwork immediately began clamoring for more. Four years later, a one-shot "coda" to New Sun was released, entitled The Urth of the New Sun. Fans would have to wait six more years before Wolfe began penning another epic; The Book of the Long Sun.

Like New Sun, Long Sun is a tetralogy following the story of a stoic, messianic male lead; Patera Silk, who is the ranking augur of the Sun Street manteion of the Chapter of the Holy City of Viron, one of many cities in a world much like our own called The Whorl. While playing a ball game with the students of the adjacent palaestra, Silk has an out-of-body, not to mention of-of-time experience which he identifies as Enlightenment by an obscure, minor god by the name of The Outsider.

What follows is a tale of religious and political intrigue with Silk at the center. The citizens of Viron want to make him their leader, believing him a messiah; the secular government wants him killed, lest he overthrow them; the church wants to use him to regain their own lost power. And all Silk wants to do is what The Outsider commanded him to do — save his manteion from its impending destruction at the hands of a crime lord who has obtained its deed.

Like New Sun, Long Sun is also complex. Not only complex, but mysterious and labyrinthine, with much ongoing debate as to the motivations and indeed basic natures of numerous characters, events and concepts within the novels. To top that off, Wolfe employs his usual blink-and-you'll-miss-it, Viewers Are Geniuses style of prose, all of which is to say that Book of the Long Sun is a long and difficult read.

Prequel series to Book of the Short Sun.

Alternative Title(s): The Book Of The Long Sun