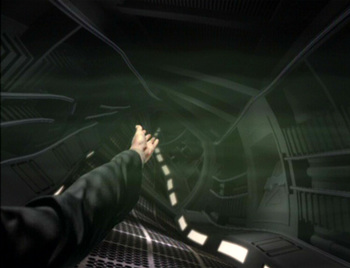 Janeway shows off her Gumby impression.
Kes arrives at the holodeck Chez Sandrine on the holodeck and is surprised when various crewmen jump out of hiding to wish her a happy second birthday. Janeway and others explain the concept of a surprise birthday party and give her gifts, while Neelix arrives with a cake. On the bridge, Kim is eager to get to the party, but he's called back to his post when the ship approaches a spatial distortion. It envelops the ship and traps it. Tuvok tries to inform the captain, but the message is garbled, forcing Kim to venture out to inform the captain in person.
Advertisement:

Tuvok's garbled message alerts Janeway that something's wrong, so she orders all crewmen back to their stations. The ship's systems are all malfunctioning, so they're unable to use verbal commands. As each party tries to make their way to their destination, they all get lost, finding themselves in the wrong location in spite of their best efforts to navigate the ship's decks and hallways. They quickly discover that the ship's entire layout has been warped.

While crawling through a Jefferies tube with Kim, Janeway accidentally comes into contact with the distortion, forcing Kim to pull her out of it. She soon becomes confused and passes out. Everyone winds up back at the holodeck, and they wonder whether the distortion is corralling them into the center of the ship. Even the Doctor can't transfer himself back to Sick Bay and has been stuck fending off the residents of Sandrine's. After pooling all of their tricorder data, they realize they only have an hour before they're engulfed. Torres suggests using a shock pulse to blast themselves out. Tuvok is against the idea, but with Janeway's mind still suffering from the distortion, Chakotay asserts his authority.

Well, the shock pulse doesn't work, so the crew are still stuck in the holodeck with the distortion growing ever closer. With no other real options, Tuvok notes that there's no guarantee that the distortion is fatal, so he suggests that they do nothing and see what happens. Everyone prepares for what might be their demise by making various final confessions to each other and making their peace. But after the distortion runs its course, it goes away, and everyone's fine. The ship's computers have been copied and now contain 29 gigaquads of new information. Janeway suggests that whatever life existed in the distortion may have been trying to communicate with them. With all that settled, everyone gets right back to Kes's birthday party.