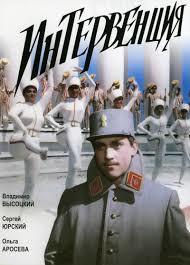 The Intervention is a 1968 Soviet film directed by Gennady Poloka. It is a historical extravaganza comedy.
Advertisement:

It is set in Odessa in the spring of 1919 when the intervention by the Entente (a moniker for the French and English tropps) in the Russian Civil war takes place. Main character, played by Vladimir Vysotsky, is a tutor of Zhenka, the son of the banker named Xidias, and at the same time a head of the revolutionary underground. He fights for communism, trying to bring about a better tomorrow for the workers. Zhenka Xidias is torn apart by his passion for revolution, a revolutioner girl Sanka (Alexandra) and gambling.