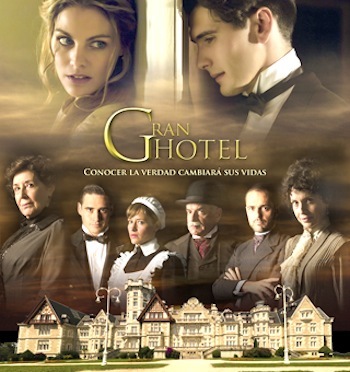 Gran Hotel is a Spanish TV series (produced and aired by Antena 3) that takes place in beginning-of-the-century northern Spain, in the fictitious Gran Hotel. It stars Yon González and Amaia Salamanca, among others, and is filmed in several points in Santander, with the Palacio de la Magdalena standing as the eponymous Gran Hotel.

The series has been well received by both critics and the public, reaching an 18.5% of share during its first season, as well as being broadcast in France, the United Kingdom and Russia. The series concluded after three seasons.

The story begins in 1905, with the mysterious disappearance and presumed death of Cristina Olmedo (Paula Prendes), a maid at the Gran Hotel. Six months later, her brother Julio (Yon Gonzalez) arrives to investigate said disappearance and gets a job at the hotel, becoming friends with Andrés (Llorenç Gonzalez), the son of staff manager Ángela (Concha Velasco), as well as with Alicia (Amaia Salamanca), the daughter of the Gran Hotel's owners, the Alarcón family. Julio and Alicia fall in love, living a passionate romance that is impossible due to their class differences, while they investigate the web of death, lies and secrets kept within the Gran Hotel's walls.

A very loose American adaptation titled Grand Hotel, with Eva Longoria as executive producer, premiered on ABC during the 2018—19 midseason.