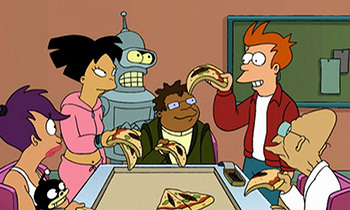 When Bender is arrested for shoplifting, Fry finds his old bank lasted to the 31st century—and the thousand years of interest has turned his meager 93 cent account into several billion dollars. Now a rich man, Fry starts buying antiques from the 20th century. Among those purchases is a preserved can of anchovies, a species now extinct. This puts him in conflict with Mom, owner of Mom's Friendly Robot Company, who feels that anchovies are the key to cheap robot oil (and a threat to her company).