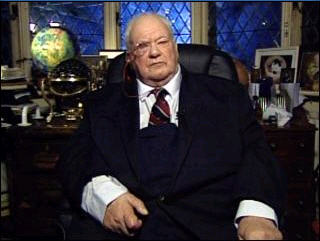 Sir Alfred Patrick Caldwell-Moore (4 March 1923 – 9 December 2012) was an amateur British astronomer best-known for hosting The Sky At Night, the ultimate Long Runner according to Guinness World Records (it's been on since 1957). He was known for his High-Class Glass (being perhaps the world's last prominent monocle-wearer), being something of a Genius Ditz, his impassioned and occasionally bizarre political stances (a Eurosceptic and something of an isolationist, he nevertheless sided with the Liberal Democrats on things like war, civil liberties, and environmental protection), and his status as a national treasure.

The author of, among other things, the epoch-making Data Book of Astronomy, Moore was one of the last remaining gentleman scientists, a very old-fashioned and crusty, yet genial, person. He met, among others, Orville Wright, Albert Einstein, Yuri Gagarin, and Neil Armstrong. His "observatory" is a small room at his house in a Real Life Quirky Town. He was notably not an Omnidisciplinary Scientist. He died peacefully in December 2012.

Although often seen today as a 'celebrity scientist', his past work represented significant, serious progress in astronomy. His work in mapping the Moon was used by NASA for the Apollo landings, and he created the Caldwell catalogue of galaxies and nebulae (named after the first, usually forgotten part of his double-barrelled name).

Also, he plays the xylophone

(or did, until arthritis set in).

He was cast as the eponymous video-game-buff-A.I. in a computer-game challenge series called GamesMaster, despite still using a typewriter and refusing to use computers in Real Life.