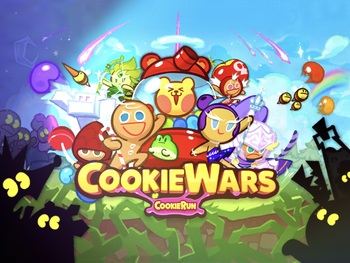 was a spinoff to the Cookie Run franchise. Unlike the endless runners the franchise is known for, Cookie Wars was a strategy game extremely similar to the popular Clash Royale, being based on protecting a home base from an onslaught of enemies with characters summoned via drawn cards.
Advertisement:

In Cookie Wars, the Cookies had just found themselves a safe new home, when mysterious purple comets started falling from the sky. These comets turned many inhabitants of the Cookie Kingdom into mindless Jelly Walkers, leading survivors to band together to save their land from destruction.

The game launched globally on August 28th, 2018, and its servers shut down on May 15th, 2020. The official Facebook page (now deleted, but able to be accessed through the WayBack Machine here

) cited difficulties in sustaining the service, but did not specify beyond this.