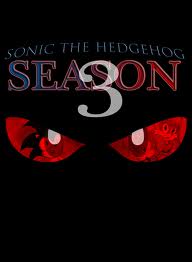 Foreboding, isn't it?
Sea3on is an ongoing fan-made webcomic continuation of Sonic Sat AM, created by the fansite Fans United for SatAM. The whole comic is based on what details were revealed about the plot of the intended third season of the show.

Picking up from the ending of the cartoon, Dr. Robotnik, the Emperor Scientist and former Big Bad, has been defeated, his Doomsday Project has been thwarted, and the Freedom Fighters are finally ready to take back their world. Unfortunately, Snively steps up and takes over Robotnik's empire, and former one-shot villain Naugus returns to wreak his own special brand of havoc. The FF, however, are prepared to fight to the end, and are joined (sort of) by Knuckles the Echidna, who has his own agenda.

The comic currently consists of six chapters and four interludes in-between, with a few one-shot jokes here and there. The series can be read here

In 2019, FUS announced an animated adaptation of Sea3on was in the works. It will be an adaptation of the webcomic, with some occasional changes.