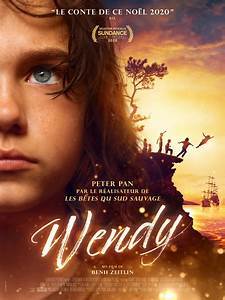 A modern reimagining of the Peter Pan story that's focused on the title character. Per this version, Wendy is a girl in the American South from a poor family, living there with her mother and brothers. One of their friends, Thomas, rebels when jokingly told he'll grow up to work there at the diner Wendy's mother owns.
Advertisement:

Wendy later sees a small figure entice him up onto a passing train, and he disappears. Years pass, and Wendy is nine, having developed a thirst for adventure. When her mother Angela tells her of an adventurous past she gave up for her children, Wendy is disheartened by the idea she'll do the same.

She later attempts to jump on the train herself, but fails. Later that night, a boy appears at her window and calls on her to follow him. Wendy does so along with her brothers, twins James and Douglas. They travel on the train long into the night before being pushed off into a river by the boy, Peter.

After they get picked up while in the water by a girl named Cudjoe Head, they're taken to a volcanic island. On arrival, they find other children there and have the promise of never growing up. However, everything is not wholly idyllic there...