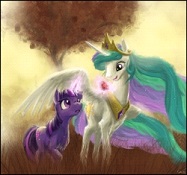 It is several years after the end to the My Little Pony series. Twilight Sparkle is working on her crowning achievement, a potential way to harness the energy of the Elements of Harmony for everyday use. But something goes wrong during the experiment. Disastrously wrong. Now the experimental apparatus is a smoking ruin and Princess Celestia lies wounded, unable to remember the events of that fateful day. As she struggles to recall what exactly happened, the Princess must wrestle with trust issues about her sister, her growing feelings for her former student, and the relentless task of maintaining her characteristic composure throughout it all.

is a deep, beautiful story that focuses on the emotional development of and relationships between Princess Celestia, Princess Luna, and Twilight Sparkle.

The story is one of the MLP fandom's most popular Twilestia ship-fics, along with Eternal, which has a Darker and Edgier take on the whole affair.

Tropes in this fiction