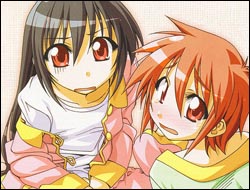 Iroha, a masculine girl, and her brother Hifumi, a feminine boy, are transferring to a different middle school and move in with their grandfather. After their first night, however, they discover that their grandmother's spirit swapped their genders, figuring that male!Iroha and female!Hifumi have better chances of giving her grandkids. The supposed cure is to act as closely to their original gender's stereotypes as possible, so either way, the grandmother wins.