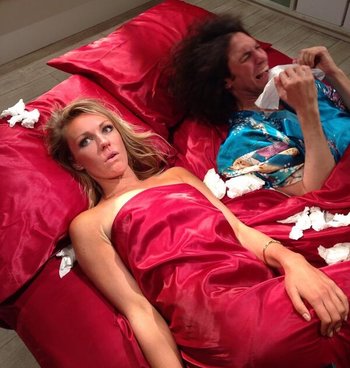 And after sex I'll cry, and also before sex I'll cry.
"It seems you're a bit of a two-pump chump. Also a crier afterwards."
— Lucifer Morningstar, Lucifer (2016)
Advertisement:

Alright. It finally happened. You just had sex, and it felt so good. It felt so good you feel like you could just cry. And you did.

There are various reasons for crying: sex can bring overwhelming passions, and many are positive. A character can weep blissed-out Tears of Joy after an amazing experience. Lovers can share Tender Tears as they lose themselves in intimacy.

However, this is commonly Played for Laughs: a character's crying is presented as shameful, unsexy, Inelegant Blubbering that utterly ruins the mood. The target of this mockery is almost Always Male, because Men Don't Cry. The reason for his distress is often shame or insecurity about inadequate sexual prowess. Maybe he can't get it up, at least not for long, and he (or his partner) is disappointed. Maybe he lacks experience. Maybe he is ashamed for other reasons, like Appearance Angst. Compare Lousy Lovers Are Losers — something that glaring, dissatisfied look on his partner's face may imply.

Can also be Played for Drama. The characters could be in emotional pain and need Sex for Solace. Maybe they carry hidden trauma that sex can awaken. And since Rape Is a Special Kind of Evil, this can be a horrifying reminder.

So what if you cried the entire time? You just had sex!

So what if you cried the entire time? You just had sex!