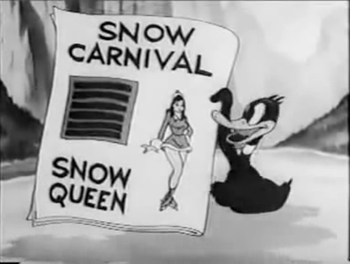 Daffy's Southern Exposure is a 1942 Looney Tunes cartoon directed by Norman McCabe and starring Daffy Duck. Originally in black and white, in 1967, it was redrawn in color. Five years after its initial release, Friz Freleng would release a color remake called Along Came Daffy, in which Daffy co-starred with Yosemite Sam.

Thinking that ducks are in a rut with their migration patterns, Daffy foolishly decides not to go south and instead sticks around to check out the "winter business". His celebration of having the lake all to himself is cut short when the cold abruptly sets in and freezes it solid. At first, Daffy enjoys the gentle falling snow, but eventually, the freezing cold gets to him and he's left on the brink of starvation. Unfortunately for the hungry Daffy, he finds himself in bigger trouble when the two kindly old ladies who take him in and feed him turn out to be a disguised wolf and weasel who are sick of eating beans and are in the mood for roast duck.