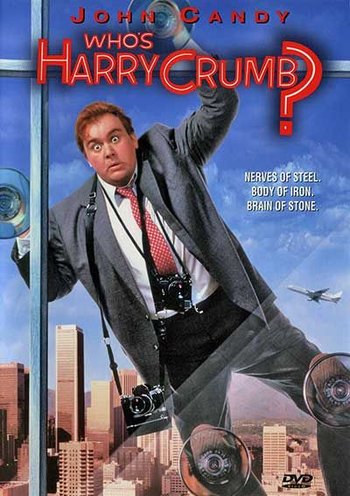 "My reputation precedes me. Otherwise I'd be late for all my appointments."
Advertisement:

Harry Crumb is the latest in a long line of Crumbs, and being a successful detective runs in the Crumb family. His ancestors, who founded the agency Crumb & Crumb, are still famous for their prowess, but that great skill must have skipped a generation - Harry is a Clueless Detective who's been stuck in Tulsa, Oklahoma, doing whatever odd jobs he can find (and fouling them up) and being the only one convinced of his own abilities. And then, Crumb & Crumb's president, Elliot Draison (Jones), calls Harry back to the head office in Los Angeles, for the first time in years.

His mission? To investigate a case of a missing heiress, Jennifer Downing, daughter of wealthy shipping owner P.J. Downing, who's been kidnapped from her mud bath and is being held for ransom at $10,000,000. Harry throws himself into his first big job in years, and even gets a surprising amount of assistance from the heiress' plucky younger sister, Nikki Downing (Smith).

What Harry doesn't know is that this case has some interesting complications - P.J.'s Trophy Wife, Helen Downing (Potts), is a ruthless Gold Digger who's aghast that all the money she's been trying to get from him is about to be given away, and she enlists the help of her man on the side, Vince Barnes (Thomerson) to somehow get to the money first. Meanwhile, Harry is also unaware of Elliot Draison's real motives for hiring a clumsy oaf like him for such a big case...

The film met reasonable box office success, but unenthusiastic reviews. It was Uncle Buck later that year that truly established John Candy as a leading man.

Tropes found in Who's Harry Crumb? include: