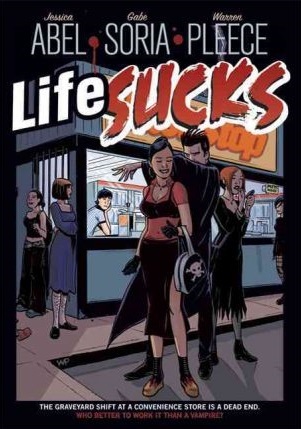 Dave is a vampire. Instead of being incredibly beautiful and rich like the vampires of fiction, though, he's just a fairly normal guy who works the night shift at a convenience store named "The Last Stop," serving his Romanian immigrant master and trying to win the heart of Rosa, a woman who likes the idea of vampires but doesn't realize they exist. When Wes, another vampire, shows up and tries to steal Rosa away, Dave's life gets rough.

This well-written and illustrated graphic novel is a deconstruction of most common vampire clichés and tropes. Life Sucks is written by Jessica Abel and Gabe Soria and illustrated by Warren Pleece.