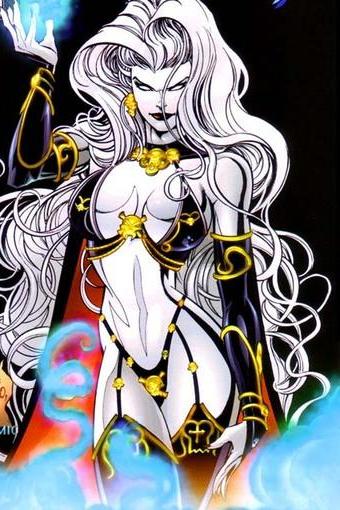 Queen of All That Is Dead and Dying
Click to see Hope in her human form. 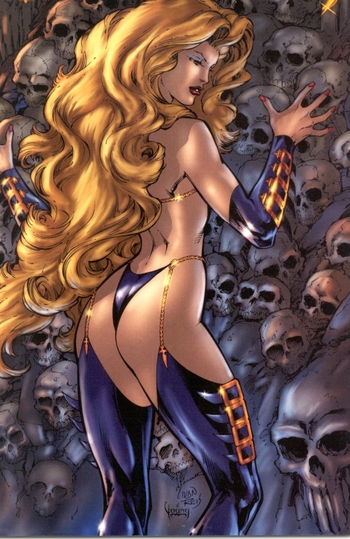 The main protagonist. Once an innocent young woman named Hope from the Dark Ages who was wrongfully burned at the stake, she rose up to become Death Incarnate in the underworld. Or this is how the general story goes... She was conceived as a supporting character for Brian Pulido's Evil Ernie, serving as his guide and love interest, but eventually she gained her own focus and over the course of her publication, she went through several re-imaginings that altered her background and character. In the Chaos! publication, she is a Swedish noblewoman who gets sent to Hell and manages to overthrow Lucifer and take his throne, but due to a curse laid by him, she is unable to return to Earth as long as humanity exists, so she turns Evil Ernie into her champion. The Avatar publications retool her origin story, removing her connection with Evil Ernie, changing her birthplace from Sweden to Austria and Hell to the Labyrinth, a dark domain in the afterlife, of which she becomes its guardian.

Tropes in common for all incarnations 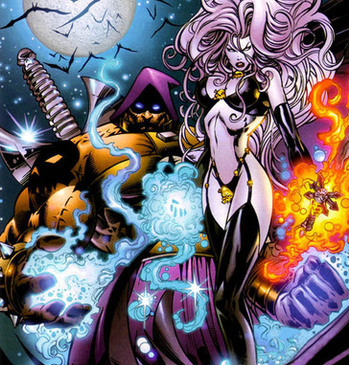 Cremator and his mistress
A denizen of hell, he was the Blacksmith for the Archdukes, but betrayed them when he discovered Hope. The two became friends and he assisted her on her journey to become Lady Death, being both a bodyguard and father figure to her.
Vandala 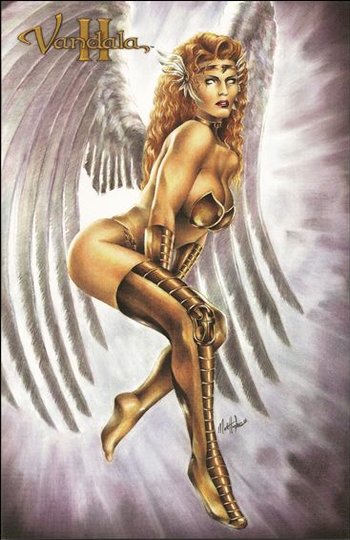 Exclusive to the Chaos! continuity, she is a Valkyrie and Hope's older half-sister, born on Medieval Sweden. Before their mother Mary was forced to marry Matthias, she fled with her two daughters Vandala and Vulnavia from the Christian armies converting the Swedish pagans. The girls were taken and raised by Odin himself after their mother prayed to keep them safe, and they were turned into valkyries. She runs into Lady Death while searching for The Chosen One who will play a key role in Armageddon and after finding out the truth of their relationship, they join sides.
Azrael/Ravenheart

The Archangel of Death. Azrael serves Lady Death who has taken the Death Scythe, and is the personification of Death. He falls in love with Lady Death's half-sister Vandala. When the world was recreated he was altered. No longer an angel but a man with death-touch, he renamed himself Ravenheart. He continued to help Lady Death in the new world.

The Blacksmith of Asgard. Under Odin's instructions he forged the sword Nightmare for Lady Death. 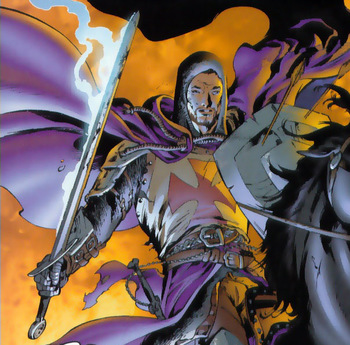 Exclusive to the CrossGen continuity, Bach is a Teutonic knight that has fought against the Eldritch and took Hope under his wing. 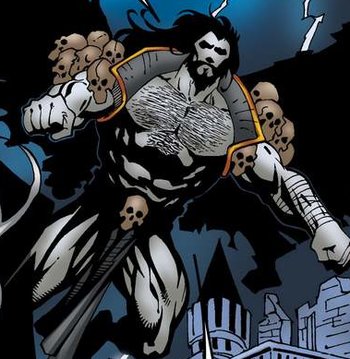 An albino sorcerer who becomes a mentor to Hope in the Avatar Press continuity.
Satasha 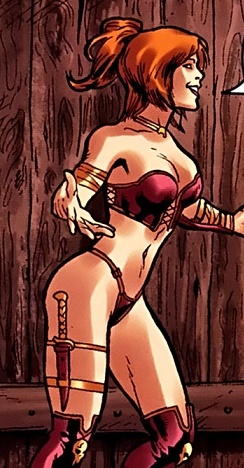 The exiled princess of Abberffraw and a human native of the Blacklands. She mentors Hope in the magic arts. 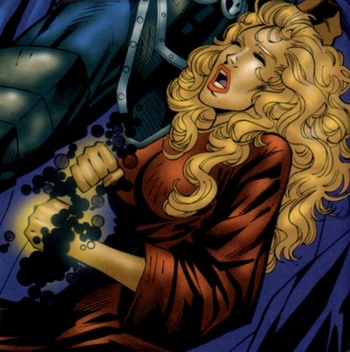 Hope's mother. In the Chaos! comics, she was a female Viking who was forced to marry Matthias and she was sacrificed along with many others victims to demons in his mad quest for power. In Avatar Press, she plays a much bigger role, being alive at the beginning of the story and after being kidnapped by Sagos, the search for her drives the story.
Tormina 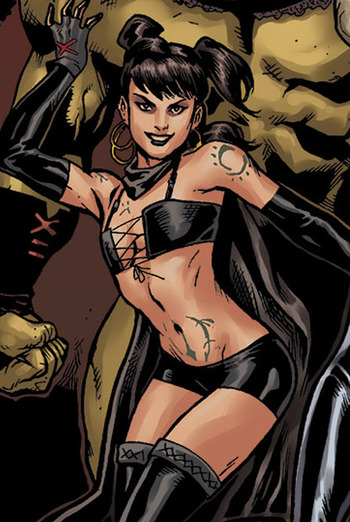 Death Queen's daughter and Lady Death's half-sister. She is a dampener, a mage capable of weakening other individuals.

Hope's father. In the Chaos! comics, he is named Matthias, a vicious Feudal Overlord plotting to overthrow the Devil. In the Avatar Press, he is named Marius, a crusader possessed by a demon named Sagos.
Lucifer 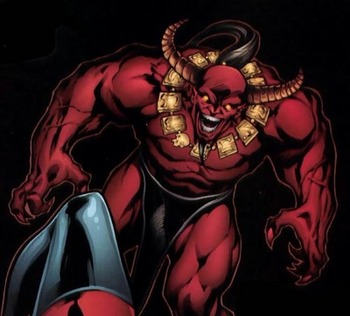 The ruler of Hell and Lady Death's predecessor. He arranged Hope's corruption of her innocent soul, but he didn't account that the power within her would prove to be too much for him to handle. She defeated him in single combat, stole his power and his hellish throne, though it's revealed that he managed to survive and as the end times approach, he wants to claim his old domain back.
Purgatori 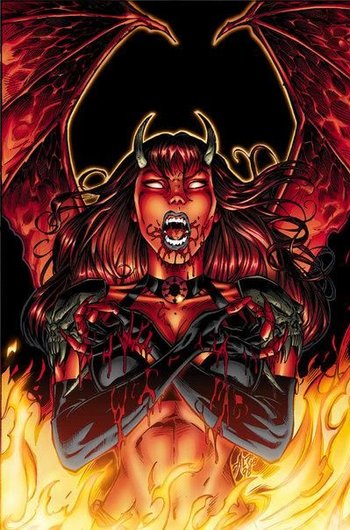 Originally born as Sakkara in Ancient Egypt, she is a vampire demigoddess, former consort of Lucifer and frequent rival to Lady Death. See her own page for more details

The emissary of the Chaos Lords on Earth. His goal is to corrupt souls for his masters. He crosses paths with Lady Death when he kidnaps her new friend Sarah Wilson. 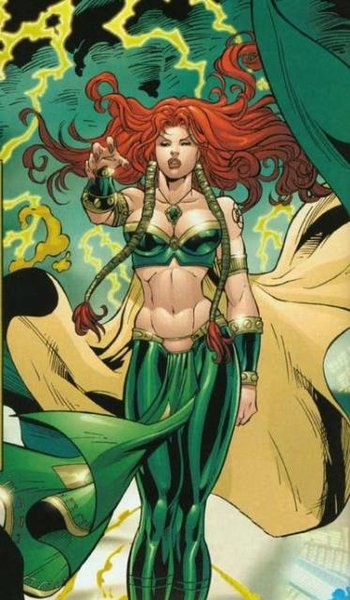 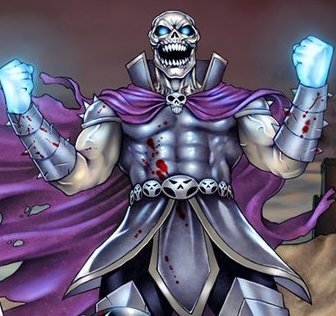 A demon who possessed the body of Hope's father and took her mother prisoner to the Blacklands. There he starts a genocidal campaign to destroy all life on the realm to gain his own dark domain in the Labyrinth.
Stigmata 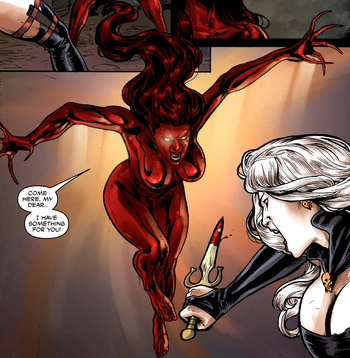 A recurring enemy from the Avatar continuity. Like Lady Death herself, Stigmata came from Earth and used to be Wargoth's wife, but now she serves as The Dragon to Sagos. She has the ability to manipulate and control blood efficiently, using to transform herself and take control of other people's bodies. 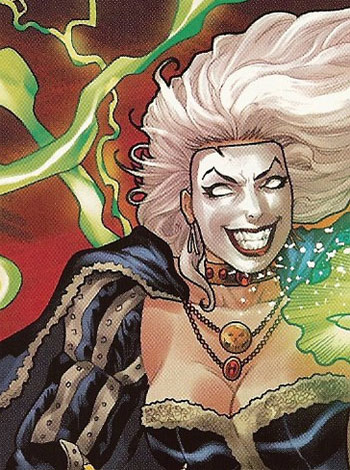 A mysterious magic user who lead a demonic horde and succeeded in ousting Lady Death from the Blacklands after stealing all of her arcane power. She is revealed to be none other than Marion's Lady Death own mother.
Behemoth

General of Death Queen's forces and her lover. He is a brutish demon with a bone to pick with Wargoth.

A very ancient, very powerful demon that was defeated by Wargoth many ages ago.