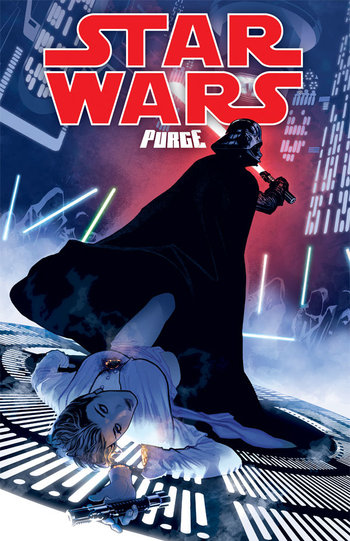 Last stand of the Jedi!
Purge is a comic book series of one-shots taking place in Star Wars Legends, after the events of Star Wars Episode III: Revenge of the Sith, detailing Darth Vader's hunt for surviving Jedi after Order 66.
Advertisement:

The first issue, released on December 28th, 2005, was written by frequent Star Wars writer John Ostrander and illustrated by Douglas Wheatley (Empire: Darklighter, Republic, Revenge of the Sith comic adaptation, Dark Times). Taking place a month after the issuing of Order 66—continuing off from Into the Unknown arc/Issues #79 & #80 of Republic, few Jedi dare to venture outside the shadows—rumors of the dark and terrible Darth Vader haunting even their waking moments. Yet, some Jedi find this life of fear unbearable. Now, a small band of Jedi have agreed to meet and discuss what should be done to oppose the Empire and its Sith Lords. However, the Empire is always watching, and Vader himself is eager to confront any Jedi that might bring him closer to the whereabouts of his betrayer, Obi-Wan Kenobi.

Seconds to Die, released on November 11, 2009, was written by John Ostrander and illustrated by Jim Hall (Rogue Squadron: Family Ties). After Order 66, most of the remaining Jedi are hiding to survive — but not all. Sha Koon, niece of the esteemed Plo Koon, has narrowly escaped the attack on the Jedi Temple, and has been left full of questions about the dark side. Sha Koon will not hide; she will find another way to continue being a Jedi — one that will place her directly in the path of Darth Vader and the Emperor.

The Hidden Blade, released on April 7, 2010, was written by W. Haden Blackman (Galaxies, The Force Unleashed and its sequel) and illustrated by Chris Scalf (Blood Ties, Incognito). On a remote world, Darth Vader chafes at the assignment given to him by the Emperor: guarding an Imperial manufacturing facility from the anti-Imperial natives. Vader feels the duty is beneath him — until he learns that a Jedi Master and his Padawan are in league with the natives. Now the game is afoot, and Vader is on the trail of his favorite prey. No ambush, no local monstrous lizards, will deter him in his pursuit.

The Tyrant's Fist, released in two parts on December 5th, 2012, and January 2nd, 2013, respectively, was written by frequent Star Wars writer Alexander Freed and illustrated by Marco Castiello (Rebel Heist) and Andrea Chella (both worked on Knight Errant: Escape). Vader continues his hunt for Jedi on a world that reveres them. Amidst the planetwide insurgency, the Dark Lord must snuff out one surviving Jedi, as well as kill the fire of rebellion in the native populace. Simple force won't work on these people; Vader must carve out the heart of their pride, and fill the hollow that is left behind with fear and obedience to the Empire, which can only be solved by removing the single block to that power.

A similar concept of Darth Vader adapting to the Empire while hunting down Jedi was also explored in Dark Lord—The Rise of Darth Vader and Darth Vader. Though in a different canon, the new Expanded Universe also covers the same topic in Darth Vader: Dark Lord of the Sith.

Purge
Seconds to Die
The Hidden Blade
The Tyrant's Fist