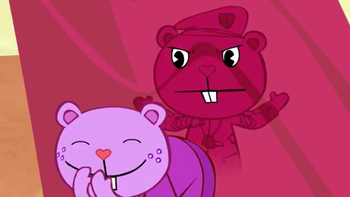 "After the rain comes a rainbow!"

"Hide and Seek" is the fourteenth episode of the first (internet) season of Happy Tree Friends.

Flaky, Petunia, and Toothy are playing hide and seek with a war vet bear named Flippy. When the bear counts down as the other critters find their own place to hide, a woodpecker begins pecking a nearby tree. The sound triggers the bear's PTSD, turning him hostile and causing him to throw a knife at the woodpecker. Toothy is hiding behind a tree, unaware that the seeker is hidden in camouflage at that particular tree. The poor beaver ends up with a twisted neck. Next up is Flaky, who is still looking for a hiding spot, only to get strangled and hung by a wire. Petunia happens to see this, scaring her. She unknowingly walks backwards into a pit trap filled with spikes. The seeker finds Petunia, who begins to raise her hand for help. Instead of help, all she gets is a grenade that explodes after the closing iris.

"Hide and Seek" contains the following: