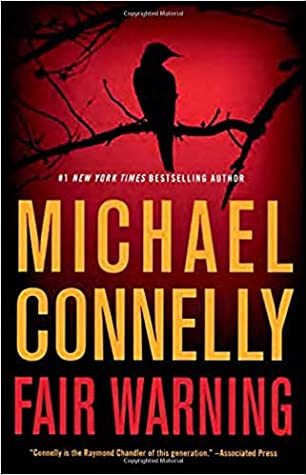 Fair Warning is a 2020 novel by Michael Connelly.

Jack is doing consumer watchdog reporting for a website called FairWarning—it's a real website, fairwarning.org, although since the publication of this book it's been dissolved. His life hasn't gone as well as he might have hoped since The Scarecrow: royalties from his two books have declined, his car has 160,000 miles on it, and he's had to move to a smaller apartment due to the meager salary from the website. Worst of all, he's broken up again with the love of his life, former FBI agent Rachel Walling. Four years ago, he used her as a source for a story, and he went to jail when a judge demanded he reveal his source. Rachel came forward and identified herself, destroying both their relationship and her FBI career.

Jack's life gets turned upside down when he gets a visit from the LAPD. It seems that a year ago, he had a casual hookup with one Christina Portrero. The police are at his door because Tina Portrero was found in her home with her neck snapped. Jack isn't a serious suspect (and he's soon cleared by DNA), but he's drawn to the story as a reporter. Jack investigates the Portrero case and finds both a brutal Serial Killer and a surprising connection to find-your-ancestry gene websites.