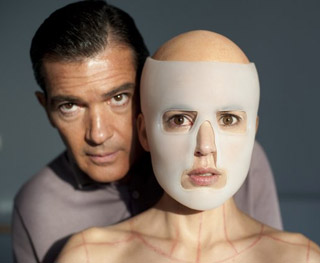 La piel que habito (known in the US as The Skin I Live In) is a Pedro Almodóvar film about a mysterious woman (Elena Anaya) undergoing equally mysterious skin transplant procedures by a secretive plastic surgeon (Antonio Banderas) as part of his research into "a skin that accepts a caring touch, yet resists all harmful attacks." But why is she held in a locked room, almost prison-like, without any contact from the outside world? Why is the doctor so adamant about keeping her hidden away? How did the two ever meet, and why is she being subjected to such procedures, which seem to be against her will?

Alternative Title(s): The Skin I Live In