Western Animation / The Moon and the Son: An Imagined Conversation 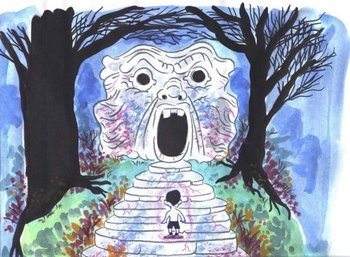 The Moon and the Son: An Imagined Conversation is a 2005 animated short film (28 minutes) written and directed by John Canemaker.

John Canemaker's real name is John Cannizzaro Jr., and the film is the history of his troubled relationship with his perpetually angry, cruel father, John Cannizzaro Sr. The film is framed as a conversation from beyond the grave, the elder Cannizzaro having died in 1995. The son (voiced by John Turturro) tells his father (voiced by Eli Wallach) about a dream that the son had the night his father died, in which he dreamed his father turned into the man in the moon. From there the movie recounts the life of John Sr., a laborer and World War II veteran who was busy emotionally (but apparently not physically) abusing his wife and two sons, when he wasn't selling bootleg liquor for the Mafia or conspiring to burn down hotels for the insurance.