Fanfic / Dumbledore's Army and the Year of Darkness 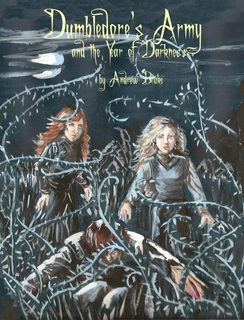 Dumbledore's Army and the Year of Darkness

began as a one-shot, 4,000-word Harry Potter fanfic story entitled Dumbledore's Army: Still Recruiting. According to the author, he soon found himself "up to [his] pointed hat in the most out-of-control one-shot in the history of the wizarding world."

DAYD, as it is known, is a P.O.V. Sequel that happens at the same time as the story of Deathly Hallows. It follows one of Harry's friends, Neville Longbottom, as he takes control of the underground group Dumbledore's Army, who soon begin a revolt and prepare for an all-or-nothing war against Lord Voldemort.

The tale continues in Sluagh

.note Destructive, restless spirits of the dead in Irish mythology. It is now five years later, all the survivors have moved on to civilian life, each nursing his and her own trauma scars. Neville is senior Auror and Simon-Wiesenthal-in-residence (so to speak) for the rebuilt Ministry of Magic, tasked with rounding up the remnants of Voldemort's henchmen. For his final assignment, he is dispatched to track down a mysterious serial/vigilante killer in Ireland and ends up fighting an even more sinister and brutal dark lord than Voldemort.

The concluding novel of the trilogy, A Peccatis

,note Translated as "Without Redemption" by the author, though it actually means "From Sins", as in the Catholic formula: "I absolve you from [your] sins in the name of..." ("ego te absolvo a peccatis tuis in nomine Patris et filii et spiritus sancti"). Artistic License comes into play because "Sine Absolutione" (the correct Latin phrase) lacks the religious connotations, and both it and "From Sins" are terrible titles. picks up in 2008. Strapped for money (the recession rippled into the wizarding world too), Neville is finally talked into joining the Wizarding legislature just as a vote on officially breaking the masquerade is pending. All the while, Dumbledore's darkest secrets are coming to light. Though a word of warning: the most recent chapter was posted on the 9th of October 2012, and the author has moved on through at least two or three more fandoms since then with no word on when they'll be returning.

, and now comprises more than half a million words by the original author in the form of the two complete novels (Dumbledore's Army and the Year of Darkness and Sluagh) with a third novel in progress (A Peccatis), along with numerous one-shots and short stories exploring various other characters. Other authors have come to play in that world as well, most notably Ceirdwenfc

, who has written stories about Ernie and Susan and is currently working on a novel, Bittersweet, which is yet another P.O.V. Sequel and follows Ernie's experiences during DAYD.

As of December of 2017, Thanfiction's account has been deactivated