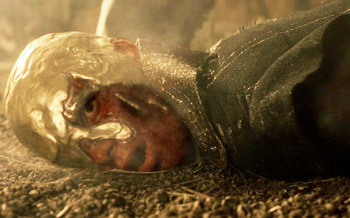 We begin in King's Landing, where Eddard Stark stirs fitfully in his bed, his leg broken from the events of the previous episode. He awakens to find King Robert Baratheon and Queen Cersei Lannister looming above him, each angry for their own reasons—Cersei for her brother's kidnapping, Robert for the disruption of the peace. It isn't long before the two of them are bickering... and not long after that before Robert slaps her across the face. Jaime has fled the city, of course, and Robert denies Ned the chance to bring him to justice, declaring the feud over. He then gives Ned the silver-hand badge, officially refusing to accept Ned's resignation. It will be Ned's job to handle things whilst Robert hunts in the kingswood.

Across the narrow sea, Daenerys continues her obsession with her dragon eggs. Today she tries putting one on the coals of the fire. Nothing happens, even when she picks it up—including the "Oww, my burnt hands!" reaction you'd expect when someone picks up a red-hot glowing stone. Dany's hands are unblemished. Huh?

Bran is having another "three-eyed crow" dream, venturing deeper into the crypts beneath Winterfell, when Hodor bursts in with the saddle Tyrion designed for him. Next thing we know, Bran is riding around on his horse Dancer, hooting and hollering, whilst Robb and Theon discuss how House Stark should react to Ned's injury. Their strategy session is interrupted by the realization that they've misplaced Bran. (Good going, guys.) Bran is elsewhere in the forest, waylaid now by four wildlings who have made their way south of the Wall, at least one of whom appears to be a deserter from the Night's Watch. Robb and Theon arrive, precipitating a short, tense confrontation, resulting in three men dead and the lone woman, Osha, taken prisoner.

Two more check-ins: first in the Eyrie, where Tyrion is in the sky cells. He tries to bribe the gaoler Mord with gold, but his purse was confiscated by Ser Rodrik Cassel, and the astonishingly stupid Mord demands money upfront, and refuses to listen Tyrion's promises of payment later, ultimately rebuffing the bribery attempt with the blunt end of his club. ("Sometimes possession is an abstract concept... Ow!") Meanwhile, in King's Landing, Arya is pre-occupied by her father's injury, but Forel pushes her anyway, pointing out that fighting rarely happens when you're clear-headed, and a distracted water dancer is a dead one. "There is only one god, and his name is Death. There is only one thing we say to death: Not today."

At Vaes Dothrak, Daenerys is eating a horse's heart. It's part of a Dothraki ritual which gets a lot more explanation in the books How Dany handles that chewy lump of muscle will foretell whether she has a strong healthy boy, or a fool, a cripple, or (worst of all) a girl, but suffice it to say that her child is to be "The Stallion that Mounts the World," some form of ultra-awesome Dothraki superman. The TV show also adds Viserys to the mix. He sees how Dany has become integrated into the Dothraki culture and, in a jealous rage, tries to steal her dragon eggs. He's stopped by Jorah Mormont, who all but declares outright that his allegiance is to the princess now. We also get the first intimations of Ser Jorah's Bodyguard Crush on Daenerys, which is likely to prove important later.

In the Eyrie, Tyrion manages, after much slow and careful talking, to convince Mord that helping him will be beneficial, as even an imbecile like Mord turns out to know the good old saying, "A Lannister always pays his debts." And so Tyrion tells Mord that he will be richly rewarded if he can relay a message to Lysa Arryn; that he is ready to confess. And it works, as Tyrion is let out of his cell and brought before the court, but much to the fair lady's annoyance, he instead launches into a litany of sins which has to be seen to be believed, while he persists in proclaiming his innocence in the matter of Lord Arryn's death and Bran's botched slaying, and demands a Trial by Combat. Ser Vardis Egen, one of the Knights of the Vale, champions her cause, while Tyrion manages to get Bronn to stand for him.

Back in King's Landing, Ned sits the Iron Throne for the first time in his life, passing judgment on the petitions of riverlanders who have come to King's Landing for justice. They were attacked in the night by a band of raving rapers, led by a man who chopped the head off a horse in anger. "That sounds like someone we know," Littlefinger whispers to Ned. "The Mountain." They also left behind a bunch of fish, which Littlefinger observes is the sigil of House Tully. "Can you think of any reason the Lannisters might possibly have for being angry with your wife?" Ned commissions a force to bring Clegane to justice, led by Lord Beric Dondarrion, and then passes a royal decree stripping Clegane of his lands, titles and knighthood. He also summons the Mountain's master, Tywin Lannister, to court; he must either declare his loyalty or face the same fate. It's on now, kids.

It is time for the trial by combat in the the Eyrie, as the light-footed Bronn fights Ser Vardis Egen, using his heavy gear and the environment against him, and handily dodges his attacks while sticking to striking the knight with small, swift attacks. It's not really a contest, especially since Ser Vardis has Lysa on his side. "Enough, Ser Vardis, finish him," Lysa shouts, after he's already been injured and Bronn doesn't have a scratch on him... and the brave fool obeys. Bronn just dodges the worn-out knight once again, slicing his leg, before he gives him the Coup de Grâce and throws him out of the Moon Door. Much to the dismay of the Tully sisters, Tyrion is returned both his freedom and his purse. One takes him out the door, whilst the other goes to Mord. "A Lannister always pays his debts."

More check-ins: In King's Landing, Joffrey visits Sansa, interrupting a pretty serious snark-fest between her and Septa Mordane. He gives her a necklace (and a kiss!) and promises never to mistreat her again. Meanwhile, near Winterfell, Theon finds his favorite whore Ros on the kingsroad, heading to the greener (fleshier?) pastures of the capitol. For a coin, she gives him one more flash of her cooter. That's the only appropriate word for the circumstances.

We return to King's Landing, where Ned assembles his daughters and announces that he's sending them home for their own safety. Sansa, her head full of dreams, protests that she has to marry Joffrey: "He'll be the greatest king there ever was, a golden lion, and I'll give him sons with beautiful blond hair!" "The lion's not his sigil, idiot," says Arya with a trace of smugness. "He's a stag, like his father." "He's not, he's nothing like that old drunk king," Sansa retorts. Both of them are completely oblivious to the Eureka Moment kindling behind their father's eyes. Ned sends them from the room and attends his giant book, The Lineage and Histories of the Great Houses of the Seven Kingdoms, where he sees that black hair is a Baratheon family trait. Every Baratheon has it, as does Gendry and the whore's infant from last episode. Every Baratheon has it... except Joffrey.

It's Vaes Dothrak, and there's a feast. Things are going pretty well for Drogo and Dany until Viserys stumbles in, either drunk or more insane than usual (he was drunk in the book, but the TV show doesn't say anything either way) and calls for his sister. The Dothraki makes fun of him, and Khal Drogo tells Jorah to offer the prince a seat... in the back of the tent. "That is no place for a King!" the self-proclaimed Dragon spits at the humiliation. "You are no King," answers Drogo in common tongue with a scoff. Angered, the Beggar King draws his sword, and holds first Jorah, then Dany at swordpoint, threatening to spill blood in the sacred city. He demands the golden crown he was promised in exchange for his sister keeping her skin intact. Drogo agrees. Viserys, happy to have his demands met, lets his guard down, only to get grabbed by the Khal's bodyguards.

While Viserys shouts furious demands for the guards to unhand him, Drogo takes off his medallion-encrusted belt and tosses it into a pot over the cookfire, where the gold begins to melt, and a horrible realization dawns on Viserys. He starts desperately begging his sister to stop the Dothraki, but she just looks coldly at him as Drogo approaches him with the pot of molten metal. The Khal lifts the up pot and once again addresses the Beggar King in common tongue with the words: "A crown for a king." To quote the book: "Viserys began to scream the high, wordless scream of the coward facing death." He gets his golden crown... but he doesn't seem to enjoy it very much. He hits the ground with clanking finality and stays there.

"He was no dragon," Daenerys decides. "Fire cannot kill a dragon."