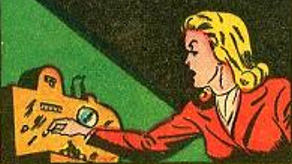 Jill at work, Doing Science.
"Two girls seem hardly a match for tommy-gunning experts at crime — but Jill and Daisy have the limitless arsenal of Science at their command! Combined with canny courage, their exploits add up to another adventure in split-second sleuthing!"

Jill Trent, Science Sleuth was a Golden Age comic book feature that appeared in Nedor Comics The Fighting Yank and Wonder Comics between 1943 and 1948. Jill was a scientist and inventor who (alongside her very close gal pal Daisy Smythe) solved mysteries with a combination of scientific knowhow and old-fashioned fisticuffs.

While quite obscure today, Jill Trent, Science Sleuth is interesting for its positive depiction of an independent action heroine who was never dependent on her boyfriend to get her out of a jam. Indeed, she didn't even seem to have a boyfriend, which itself was quite unusual for comic book heroines of the day. And while Jill typically used her science skills to solve the mystery, stories were generally resolved by Jill and Daisy punching out the bad guys, just like their male counterparts would.

The Jill Trent stories are now in the public domain. Scans of several stories are available on the Internet from sites such as the Nedor-a-Day Blog

Jill Trent She Sir Science Sleuth is a Remix Comic parody of the original, in which Jill was formerly a slow-witted janitor named Jim, before exposure to Femavium turned him into a girl who has "girl-brain cells with the proportional density of 58 girls" that allow her to Do Science at an amazingly high level.

In 2015 thanks to Jill Trent being in the public domain a new #1 was published with 5 different takes on Jill and Daisy. it can be bought either physically or digitally at http://www.superdamescomics.com/