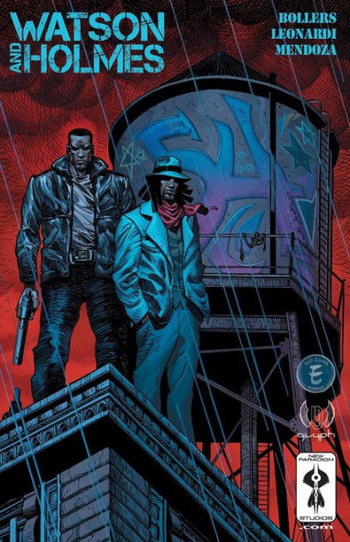 Watson and Holmes is a Kickstarter-funded comic book by Karl Bollers and Rick Leonardi.

Like the inspiration, Holmes is a private detective, and Watson is his assistant. That's the only similarity they share, though. In this adaptation, Holmes and Watson are black and live in the Harlem district of New York City.

Dr. Watson is a veteran from Afghanistan who now works as a doctor in an inner city hospital. He meets Holmes when one of Holmes' cases brings him to said hospital. From there, the two are brought to work together (at Holmes' behest) to work on a case involving a missing girl. From there, they become partners and take on a whole series of cases.

Watson and Holmes contains examples of: