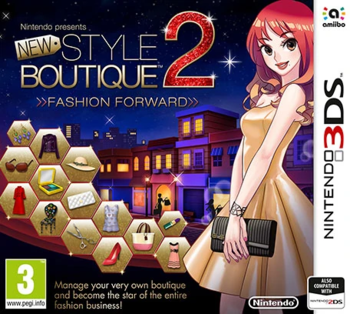 The third game in the Style Boutique series, which released on the 3DS in 2015. Called Style Savvy: Fashion Forward in North America.

You've just received an old dollhouse from your grandmother. Said dollhouse happens to contain a tiny little person, named Sophie, who is thrilled when you give her a doll's beret. She invites you into her own little world, which you access simply by closing your eyes and imagining yourself in there.

Alas, all is not well in Beaumonde City. The boutique is about to close down... but with your eye for fashion and Sophie's enormous social network, you can surely raise it up as the fashion capital of the town! That is, if you can persuade Adelaide, the CEO of the company that owns the building...

Fashion Forward significantly expands the scope of the series. As well as 19,000 items of clothing, there are multiple NPCs with their own storylines who come to you for help with their fashion woes. Clothing design is back, revamped, and much broader and deeper - you can now choose what type of item you want to design, a variety of cuts, pattern, colours, as well as frills, bows, ribbons, and various other accoutrements. As well as the boutique, the player can pick up gigs at the beautician, hair salon, and hotel as well as doing some professional modelling, which provides a more varied gameplay experience as well as alternative revenue streams. It is also the first to be amiibo-compatible, certain (mostly female) amiibos unlocking unique clothes when scanned.