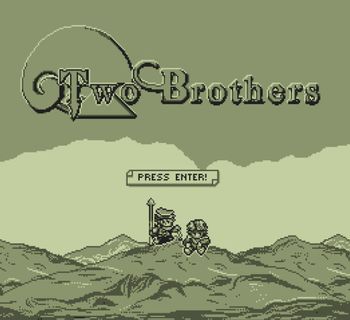 Two Brothers, by independent developer Ackk Studios, is a Zelda-like Action-Adventure game with a Game Boy aesthetic which make it look somewhat like The Legend of Zelda: Link's Awakening, with full scrolling and an overworld view.

Roy and his wife, monochromatic people in a monochromatic world, are adventurers in the most dangerous of places, including trap-filled dungeons and lairs of long-dead beasts. When one of them turns out to be Only Mostly Dead and resurrected by a Sealed Evil in a Can, it claims Roy's life just seconds after a trap tragically kills his wife. He awakens in a very colorful afterlife, where a powerful being claims it's not yet his time and sends him back.

One year later, Roy is no closer to a breakthrough in his research into color, which enthralls him much more strongly than his adventuring ever did. But then he receives a message from his brother, helping with Roy's research in a nearby town, promising progress has been made...

around the time of its release.