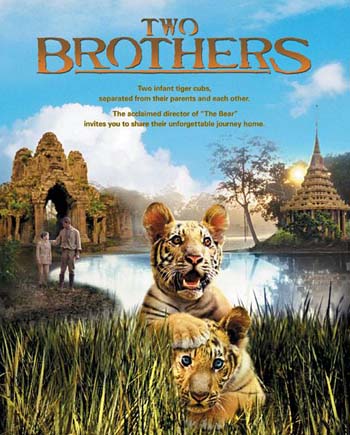 Two Brothers (Deux Frères) is a 2004 adventure family film directed by Jean-Jacques Annaud. It is about two tigers who are separated as cubs and then reunited years later. Set in 1920s French Indochina, two tigers are separated as cubs after the ancient temple where they live is disturbed by Aidan McRory (Guy Pearce), who intends to steal and sell the ancient statues.

McRory is an unscrupulous explorer, big-game hunter and temple looter. He discovers Kumal and befriends him, but McRory is arrested for stealing from the ancient temple and Kumal is kept by the chief in the Cambodian village where McRory had been staying. The chief then sells Kumal to a circus where he is to be the star attraction.

Sangha remains in the jungle with his mother, but both are soon trapped by McRory as game for a vain Khmer prince to hunt. The mother is shot in the ear and thought to be dead before she jumps up and runs off with a hole in her ear. Sangha is discovered by young Raoul, son of the French administrator, Normandin, and becomes the child's pet.

Not to Be Confused with this over-the-top action movie from Rick and Morty.