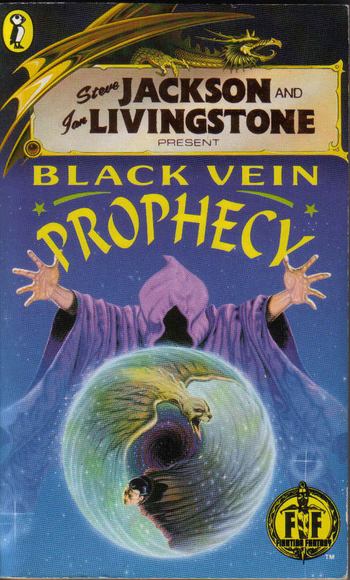 War and chaos wreck the Isles of Dawn, as forces of evil threatens to wrestle control of the Isles from its child-king. The Black Vein Prophecy, decreed fifty years ago after the defeat of the tyrant Bezenvial, will seemingly be fulfilled. The ancient forces of evil have returned!

Between all the chaos happening in the once-peaceful Isles of Dawn, is you, the hero of the story! And you will… you will… uhh…

… who are you exactly?

Waking up in a sarcophagus in an ancient mausoleum, with no memory of your past and zero recollection of the prophecy, your entire life shrouded in darkness, you stumble out to discover the truth. Somehow, you are involved in this prophecy; specifically, you are destined to stop it!

Black Vein Prophecy is the 42nd entry of the Fighting Fantasy gamebook series, written by Paul Mason and Steven Williams. The FF-verse equivalent to Ming Dynasty China, the Isles of Dawn, is introduced here, and is depicted as a Warring Kingdom caught in an ancient conspiracy. The puppet ruler of the Isles is completely incapable of managing the country and the evil warlord Feior about to fulfill the dreaded Black Vein Prophecy to rule the Isles with an iron fist.

As the adventure goes on, you will uncover details surrounding the prophecy, the truth about yourself, your heritage… and your fate. In an epic revelation, you shall be the unexpected hero, destined to free the Isles of Dawn from evil, and restore peace to the kingdom. The mysterious Isles, with its Oriental-inspired, Eastern-influenced setting and background, unique magic and myths — a departure from the usual European high-fantasy FF is typically known for — offers a different flavour for once for fantasy gamebook fans.

The sequel, The Crimson Tide, would allow players to return and explore the Isles of Dawn once more, this time with even more emphasis on the ancient China and Ming Dynasty-esque elements.