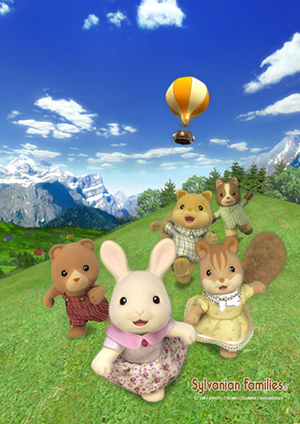 "What's wrong, everyone? Why do you look so angry?"
—Rebecca Periwinkle
Advertisement:

A 3-episode 3DCGI Original Video Animation in 2007 based on the Franchise of the same name, Sylvanian Families is what you get when you combine Slice of Life stories with Talking Animals and a helping of sugar. Basically made in a different concept than the Western Animation counterpart but also made (at least in part) to cash in with the franchise it's based on, each of the stories were done accurately to the series's original concept, with a little deep surreal moments and regarding magic in between. The plot of the series varies from silly to being serious. This is the first anime to be based on the franchise (despite its Japanese origins) although the 1987 DiC TV series had been made with Japanese staff.

The series is animated by Dyna Method and directed by Akira Takamura of Kirby: Right Back at Ya! and (believe it or not) Neon Genesis Evangelion, written by Hiroko Okada, produced by both Koji Kawaguchi of Doki Doki Pretty Cure and Yumiko Murai and songs composed by Koichiro Kameyama. All three episodes were released in the same date of June 20, 2007. Two years later, on Febuary 16, 2009, HiT Entertainment released a compilation of all three episodes on a single DVD in the UK.

Each episodes as follows (official English title in square brackets):

The first OVA episode. It focuses on Rebecca and her friends trying to do a revenge prank on Buster, a fox whose magic causes trouble to the other Sylvanian friends. Thought he fell for it, he soon helps everyone to amend his mistakes.

The Longingly Princess [Dreaming of Princess]

The second OVA episode. This one involves Saffron's disagreement with her father's inventions driving her nuts. And also being a princess for the school's annual school play, in which she had problems. But she had a little help.

The Gift of the Shooting Star [Legend of the Comet]

The third and final OVA episode. It involves Rebecca and her friends finding the fragments of the Silvery Comet which landed on Acorn Mountain. Thought hilarity ensures that this is more of an expedition.

In late 2017 and through early 2018, two ONAs as well as a series of shorts were produced specifically for Netflix. The localization work put into the series can be said to be extremely overboard - not only was the series' name and episode titles changed by region, but even the character names differed by region- the show appears on Netflix as Calico Critters in the US but Sylvanian Families in the rest of the world. Additionally, the chocolate rabbit girl goes by the name of "Bell" in the US dubs but is known as "Freya" elsewhere, and that's just one example and not even getting into their original names in the Japanese localization. And the changes to the name were reflected in the episode's title card. They even made two separate English dubs- the US one uses talent from Bang Zoom! Entertainment while the International English dub uses British talents from an unknown agency handpicked by Half HP Studio.

A Town of Dreams

The first of the two OVAs, the special has Bell/Freya visiting town to visit her big sister, who designed a dress for a fashion show.

The Treasure of [Sylvanian|Calico] Village

The second half of the OVA set. The mayor puts on a competition to pick the loveliest thing in the village.

A set of 12 shorts showcasing the daily life of the children of the village.

A second set of shorts were produced in late 2018, but those were published to Youtube instead. So far there are 12 episodes, All have been localized to International English. They have not yet been localized to US English.

Better hurry, tho- as of January 10, 2019, the episodes are being moved to Amazon Prime Video... who is only making it available to countries that have a dedicated Prime Video site for the country, and not on the Global site. Yeah, prepare to proverbially circulate tapes if you treasure your memories of the episodes, and you live in a dump of a country that only gets Prime Video Global.

A third set of shorts were produced in early 2020. Now called Sylvanian Families ~ Clover, the short marks the move back to Netflix from Amazon Prime.

Tropes appearing include, but are not limited to: