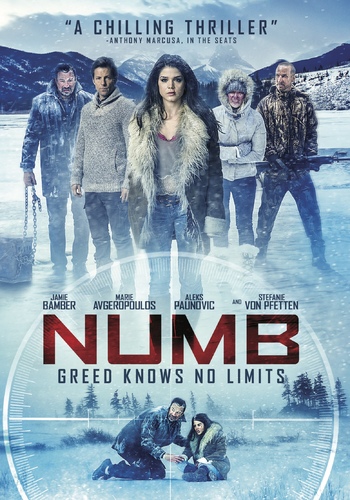 Numb is a 2015 Thriller from Canada, made by director Jason R. Goode, and produced by Jenkinson/Goode Productions.

Will (Jamie Bamber) and Dawn (Stefanievon Pfetten) are a couple facing imminent foreclosure on their house, depending on Will's upcoming job. Will learns that he was not hired, the couple picks up a pair of hitchhiking siblings, Lee (Aleks Paunovic) and Cheryl (Marie Avgeropoulos), and they happen upon a clue to a buried haul of gold coins from a bank robbery two decades ago. Will's experience tells him that this is a foolish mission, but nonetheless, the four begin a trek across the Canadian wilderness, in the dead of winter, seeking buried treasure.

No relation to the 2007 film featuring Matthew Perry.