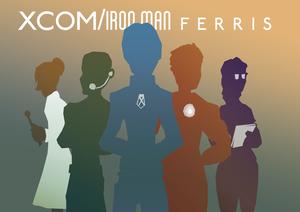 In the fields the bodies burning, as the war machine keeps turning...
Jocasta: We've found that this isn't a war ordinary tactics can win.
Advertisement:

an XCOM: Enemy Unknown/Marvel Cinematic Universe* For starters, before eventually incorporating the X-Men and the Fantastic Four into the story. crossover fanfic by u63r. Later portions of the fic added elements from XCOM 2.

Eamon is an Irish geek who keeps traveling between fictional universes at the behest of some mysterious figure he calls "The Benefactor". One day, he wakes up in the body of a woman named Irene on a helicopter next to Tony Stark, who's just been hired as the Chief Engineer of XCOM.

Needless to say, the bad guys don't like that one bit. Especially when Tony starts building powered armor for XCOM troops. Oh, and did we mention that the aliens are working with HYDRA?

This crossover fanfic provides examples of: